The United States government has set a goal of using wind energy to generate 20 percent of the nation’s electricity demand by 2030. As the U.S. looks to generate more wind energy onshore and expand into the technically challenging offshore wind market, it will not only need to innovate, but also learn from other countries’ approach to the installation, construction, and maintenance of offshore wind projects, which are moving farther and deeper than previously thought possible.

Scotland has already shown that it is a powerhouse in the renewable energy industry. The Scottish government recently announced its aim to generate 80 percent of Scotland’s electricity consumption through renewable sources by 2020, primarily through wind power. While these targets may seem ambitious, they are certainly not unrealistic; Scotland has fantastic wind energy resources—25 percent of the European total—and there are plenty of opportunities to generate additional power through both onshore and offshore wind energy.

Scotland now seeks to enhance its offshore wind sector by opening up much of its territorial waters to wind farm development. It currently has more than 90 onshore wind farms in operation or under construction, and it is leading the world in the development of deepwater offshore wind farms, having deployed two of the largest-capacity turbines ever constructed. Indeed, there are many lessons learned in Scotland that can be applied around the world.

Going Deeper
Scotland has led the way in offshore wind with the Beatrice Wind Farm Demonstrator Project. Located 12 miles off the country’s east coast, the project is a world first. In 150 feet of water, Beatrice is operating at almost double the depth used anywhere else, using 5MW wind turbines; the first of this size ever installed offshore in the world.

This project has paved the way for future large-scale wind development off the shores of Scotland. The proposed follow-on full-scale development of the Beatrice Demonstrator will be a wind farm of 920MW installed capacity. The Crown Estate—the body in the United Kingdom that dispenses the seabed rights in the country—has granted a number of leases to develop commercial scale wind farms in the waters around Scotland. Offshore, there will be 9,500 turbines installed around the UK in the next decade, of which Scotland’s share will amount to around £30 billion worth of investment, and up to 28,000 jobs. Currently production of 10.5GW is planned off the coast of Scotland, with 5.7GW in territorial waters and 4.8GW in the Crown Estate’s leases in the Moray Firth and the Firth of Forth. Although deepwater turbines are more expensive to install, operate, and maintain than those onshore, they provide less visual intrusion, can generate more energy, and can be developed at a much larger scale than onshore wind. Figure 1

Repurposing Resources
Scottish companies utilize proven technologies borrowed from the oil and gas industry to assemble, install, and operate the Beatrice turbines.  The substructures for the wind turbines are jacket technology (lattice towers) taken straight from offshore oil and gas experiences. Much of the supply chain that now exists to serve offshore petroleum production could be configured to support offshore wind.

The Scottish-based Burntisland Fabrication built the jackets for the Beatrice project and is now supplying jackets to several near-shore wind developments in the UK and Europe. Jackets can be installed in deeper water with less visual intrusion, they require less steel—which reduces cost—and can support much larger wind turbines (5-10MW) than conventional monopiles, which have been the solution to date in shallow water near shore projects.

Burntisland Fabrication is also deploying its oil and gas industry expertise in the area of marine energy, having recently won the main £2 million contract for the next stage of the development of one of the world’s most advanced tidal turbines, Hammerfest Strøm’s HS1000 device, which will be installed at the Scottish government-supported European Marine Energy Centre (EMEC) in Orkney in 2011. This is part of over £4 million worth of contracts awarded to Scottish businesses by Hammerfest Strøm UK, a company jointly owned by Scottish Power Renewables and Norwegian energy companies.

Expanding Onshore
Offshore wind is a new direction for renewable developments, but Scotland is already a major market for onshore wind. Europe’s largest onshore wind farm, which is already powerful enough to meet the city of Glasgow’s electricity needs, is set to expand by more than a third as part of a major green energy initiative by the Scottish government. The 322MW Whitelee wind farm south of Glasgow has been given permission to increase its capacity to a total of 215 turbines. Construction has already begun on the expansion and is expected to be completed by 2012, delivering 596MW, which is enough energy to power 180,000 homes. An ambitious scheme in the Shetland Isles has also recently been submitted to the Scottish Government for a 550MW wind farm. This will be a joint venture between the community-owned Shetland Trust and major utility company Scottish & Southern Energy. This will also include a 330 kilometer subsea cable back to the Scottish mainland.

Additionally, Scotland’s onshore wind industry presents excellent opportunities both for companies involved in supplying components such as towers, blades, gearboxes, and hubs, and those involved in operation and maintenance. Furthermore, due to the scale of the country’s onshore wind sector, many of the overseas wind turbine manufacturers have set up sales, operations, and maintenance facilities in Scotland. These companies include REpower, Siemens Wind, Nordex, Vestas, and Skycon. Figure 2

Collaboration is Key
The Scottish European Green Energy Center, which opened this August, is a government and university collaboration. A £1.6-million investment in the Aberdeen facility through the European Regional Development Fund, and more than £1 million of funding from the Scottish Government over the next three years, will allow SEGEC to focus on marine energy, offshore wind, long-distance super grid development and smart distribution grids, carbon capture and storage, renewable heat, and energy efficiency.

In the private sector, Scottish and Southern Energy, PLC, and Mitsubishi Heavy Industries Ltd (working through their European subsidiary Mitsubishi Power Systems Europe Ltd) recently signed a strategic agreement to cooperate on low carbon energy developments including offshore wind farms, carbon capture, and high-efficiency power generation. The agreement builds on SSE’s establishment last October of a Centre of Engineering Excellence in Renewable Energy in Glasgow and should lead to up to 100 additional highly skilled, engineering-based jobs being created. This is expected to grow to up to 1,000 jobs over five years.

Scotland’s Low Carbon Investment Conference in September 2010 is another example of the country’s ability to forge lasting partnerships around wind energy development. Conference attendees included Scotland’s First Minister Alex Salmond along with global politicians, industry executives, and representatives from several U.S.-based renewable energy companies and investment firms. On the first day of the conference Salmond announced the country’s move to increase its renewable energy target from 50 to 80 percent supply by 2020. Several of the expansions and new wind energy proposals that will contribute to meeting this aggressive goal were on display throughout the conference.

Academic Support
The close cooperation between Scotland’s universities and companies has created a united community of innovation to rival the world’s biggest centers of academic excellence. In collaboration with Scottish Development International (SDI) and a government determined to attract the best in academic and business excellence, Scotland offers a huge range of free support and incentives to companies investing in the country’s people and economy. Scotland’s universities house a number of research and development centers and institutes, which themselves have spawned a number of companies in the wind energy arena that have already produced advanced products and services, and others are involved in the further commercialization of research projects to add to the body of work coming out of Scotland.

Marine Innovation
Simultaneous to the rather aggressive development and deployment of wind energy technologies, Scotland is also deeply invested in leveraging innovative marine energy technology. The Scottish government is working proactively to promote continued development in tough economic times with initiatives such as the Saltire Prize, awarding a £10 million challenge prize for advances in marine renewable energy. Jaison Morgan, an advisor to President Obama and leading expert in the use of innovation prizes, recently lauded Salmond as being “ahead of the White House” for implementing this prize to drive renewable technology innovation. Scotland already has other innovative incentives in place to support the development of marine energy (wave and tidal). The Crown Estate has completed a licensing round for the Pentland Firth between mainland Scotland and the islands of Orkney, which is the first commercial scale development in the world for wave and tidal energy. This 1200MW development will be operational by 2020 and will utilize technologies trialed and tested at the EMEC in Orkney. Figure 3

In recent weeks Atlantis Resources Corporation has successfully deployed its AK1000™ tidal turbine, the world’s largest rotor diameter tidal turbine, on its subsea berth in 35 meters of water at the EMEC. The device is one of a number of technologies currently being tested at EMEC, and it is 22.5m tall, weighs 1,300 metric tons, and has a twin set of 18m diameter rotors.

In a parallel development that will take offshore wind into a new technical dimension, Statoil—a Norwegian-based oil company—is discussing the possibility of developing the world’s first floating wind farm in Scotland. The company has identified two potential sites, one off the coast of Lewis and one off of Aberdeenshire, that could be suitable for a pilot park, testing the concept of their Hywind floating turbines further.

Statoil has already constructed a full-scale prototype Hywind unit, anchored 10 kilometres offshore at Karmøy in Norway. The floating wind turbine is performing beyond expectations and has delivered power to the grid since September 2009. The next stage of the project could involve constructing between three and five Hywind units to document the commercial potential of the concept.

Scotland’s unique collaborative environment, innovative spirit, wealth of natural resources, and experience in energy research and production has allowed a nation of five million to take the reigns as a pioneer in wind energy. At a time of global need for new, alternative sources of energy, this small nation has a vital role to play in leading the way for the next generation of energy research and production, and in influencing other countries to follow suit. 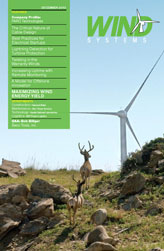