Home Departments Manufacturing Acciona To Pilot Moventas’ High Torque Density Gearbox
Share on Facebook
Tweet on Twitter
PDF Digital
Acciona Windpower has agreed with Moventas on prototype as well as serial deliveries of a 3 MW wind gearbox product based on Moventas’s new Exceed series of high torque density gearboxes. Deliveries of the new technology will take place in 2015, adding to the on-going 3 MW deliveries Moventas has been making to Acciona since 2009.
The recently entered agreement concerns two Exceed prototype deliveries as well as serial production of the new Exceed gearbox, both of them expected to take place in 2015.
In 2012, Acciona Windpower and Moventas agreed to together develop a new version of Acciona’s very successful 3 MW turbine, with the objective of reducing size and increasing torque density. Outcome of this is the Exceed gearbox series, a 3 MW and up product platform with the best ratio price/nominal torque in the market that’s now available to the industry.
Exceed provides 20 percent more torque density with 10 percent less size with 100 percent proven Moventas technology.
Our engineers took measured gearbox values of the technology we’ve been using for a decade, recalculated them with new design methods and took them to a new level. As a result, with Exceed, Acciona gets more torque out of a smaller and more lightweight gearbox, explains Global  Accounts Manager Pedro Figueiras from Moventas.
Acciona and Moventas already have a long-standing partnership. Deliveries of the existing gearbox concept will also run alongside the serial deliveries of the new Exceed technology in 2015. Over time, Exceed will replace the existing gearbox deliveries. The deliveries are made from Moventas’ highly modern wind gear factory in Finland. 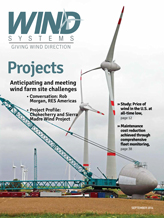 Senvion Acquires Euros as Next Step of Its Product Strategy