When the fourth-largest wind farm operator in China increases its installed capacity by 50 percent within one year, it indicates the company knows its business. And one of the business aspects that all wind farm operators need to take care of is “turbine reliability,” or keeping the turbines turning as much as possible and keeping maintenance activities down to a minimum. Reduced or controlled maintenance is always a valuable contribution to bottom line profitability, but when you’ve got 2,000MW of installed capacity, the target by end 2010 for Guohua Energy Investment Company—based in Beijing, China—then you are talking about huge amounts of money.

That is why Zhou Weihua, deputy general manager of the Production Department, made a decision in 2008 to evaluate his maintenance strategy and the technology to be applied within that strategy. A critical decision was to look for the most reliable and experienced way to determine the health of his turbines in the fastest and most effective way. Figure 1

Investigating Online Monitoring
With a few different turbine designs and sizes out in the field, he needed the best possible way to get reliable and regular information about the general condition of selected turbines of these designs and types. At the same time he wanted to identify any typical negative trends that might occur in the various, but differing, field operating conditions that the turbines would be deployed to. Not being satisfied with his previous assessment process of only using temperature readings of gearbox oil and generator bearing housings, he wanted to investigate online monitoring, where vibration signals from critical components are collected 24 hours a day and analyzed to determine exactly if and where problems are developing, and how severe any problems were. This type of monitoring would also provide valuable knowledge that could allow critical maintenance to be planned and avoid unexpected and very costly breakdowns. He knew that this type of condition monitoring is widely used in the United States, Europe, and Australia, etc.

Gaining Firsthand Experience
His first step was to make a deep investigation of what technology was available, and the quality and knowledge of the suppliers. These investigations covered all the key suppliers of such technology, but contacts with other wind farm operators in China quickly brought him to consider SKF and its turbine monitoring system for further discussions. “Of course I knew of SKF,” says Zhou, “they are the number one bearing specialist in the world with expert knowledge in many industries over many years in many countries, also here in China. And I had heard of the SKF WindCon turbine monitoring system, but had never used it before.

“After direct contact with SKF I heard that they had recently been successful with remote online monitoring, where data from the monitored turbine in the wind farm were transmitted by Internet to their specialists for analysis,” he says. “In order to get firsthand experience of their remote online capability I visited Intelligence Centre Wind (ICW), their major wind turbine diagnostic center in Hamburg, Germany.” Figure 2

At the time of Zhou’s visit to SKF, ICW was receiving and processing data from more than 600 turbines from across Europe and also from the United States. “In Hamburg I saw examples of almost all the capabilities of an SKF WinCon system, because there were so many systems deployed in so many wind farms,” he says. “The level of detail that the system could give was clearly demonstrated, and the explanations by the people making the analysis clearly indicated that they knew all about wind turbines and the critical machinery. The Hamburg visit gave me the confidence to set up a field trial on some turbines in Guohua wind farms in 2009.”

Farm Field Trials
The field trial involved 11 SKF WindCon systems to be deployed across three wind farms; in Jiangsu province, Shadong province, and Inner Mongolia. Around the time SKF were installing their systems in the Guohua turbines, it had opened a Remote Condition Monitoring Centre in Shanghai. Having SKF experts so close was an added benefit to Zhou, and he was anxious to get the systems operating and see what the results would be.  The data was collected on a local server at each wind farm and transmitted to an SKF server in Shanghai for analysis. Any immediate emergency situation would be reported at once, but an “emergency situation” was not detected at start-up of the monitoring, and a report was issued once per month to the wind farm site managers and Zhou. The reports contained the detailed vibration spectra for the key components being monitored, together with a brief statement that summarized the analysis of the data in terms of the condition of the component. But there was also a “report grid” that indicated the components being monitored, and each one had one of three colors; green, yellow, or red to give immediate indication of the condition, with green being OK, yellow being a slight to major deviation from the “acceptable levels or trends,” and red being something requiring immediate attention. Figure 3

The first results were good, because Zhou could “see” for the first time what was really happening with his critical machinery. The SKF WindCon systems delivered the vibration spectra, similar to those he saw in Hamburg, and the SKF experts in Shanghai interpreted the data in terms of the condition of the bearings, potential misalignment, and gear damage, etc.

During the six months prior to January 2010 the SKF WindCons provided good information on the turbines, allowing Zhou to determine if and what maintenance would be required. In that period one of the installed SKF WindCons identified a severely damaged generator gearbox bearing at the Inner Mongolia wind farm.  Figure 4

Success and Further Deployment
“The SKF WindCons did their job,” Zhou says. “They kept me informed, and the early identification of the severity of the damaged bearing in Inner Mongolia was enough to allow us to plan for replacement at minimum cost and disturbance to the planned electricity supply from the turbine.”

Since the tests Guohua has installed another 58 SKF WindCons, and an additional 280 were ordered for new turbines that went into service in 2010. This is the start of a mass application of remote monitoring, and Zhou says that “we have some knowledge regarding vibration analysis within our own maintenance teams, but I intend to build up more knowledge within the Guohua organization and set up our own remote monitoring centre in Beijing for our turbines. A lot of this knowledge and assistance will come from SKF as they provide us with their remote diagnostic monitoring during the coming years.” 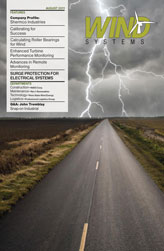