Adwen and Winergy have developed the biggest gearbox in the world for Adwen’s AD 8-180 offshore wind turbine. With an input torque of close to 10,000 kilonewton-meters (kNm) and a weight of 86 metric tons, it is the largest wind turbine gearbox ever built.

Winergy’s gearbox was designed exclusively for the AD 8-180 wind turbine. It is part of a medium-speed drive-train concept that will considerably help reduce the levelized cost of energy (LCoE) on Adwen’s new offshore giant. At 180 meters, the AD 8-180 boasts the world’s largest-diameter rotor. In combination with a nominal electrical power of 8 MW, the gearbox attains an input torque of close to 10,000 kNm — a value never before equaled.

This 70-percent increase in torque capacity was achieved with only a 20-percent weight increase compared to other gearboxes used in offshore wind turbines larger than 6 MW. The two-stage-planetary gearbox is directly connected to a medium-speed generator via a flange connection. Thanks to the choice of a medium-speed gearbox concept and leveraging on proven technologies well-known by both companies, Adwen and Winergy can successfully maximize the efficiency of the drive train, while cutting the cost of the components. In tests, the gearbox attains an efficiency of well over 98 percent. Further, by reducing the built-in components, its reliability increases.

Winergy has manufactured four gearboxes for Adwen with the goal of having them fully validated in three phases. The first one will be at Winergy on a modified test bench being used for the back-to-back testing of two identical gearboxes with up to 125 percent over loading. Adwen’s validation process, the most stringent ever taken on a gearbox and drivetrain this size, requires these tests to guarantee maximum reliability of this critical component.

The second phase will be at Fraunhofer IWES Test Center’s Dynamic Nacelle Testing Laboratory where the gearbox will undergo exhaustive tests in combination of full drivetrain and nacelle. The final phase is field tests with the installation of the AD 8-180 prototype in Bremerhaven, Germany.

“We continue pushing the limits of the industry with our AD 8-180, this time with the largest gearbox ever built,” said Adwen CEO Luis Alvarez. “This key component has performed extremely well during the exhaustive validation process which makes us confident the first prototype of the turbine will meet and even exceed our expectations in terms of performance and reliability when it is installed. In addition, as the rest of the main components, it has been designed with scalability in mind enabling the future evolution of the platform.”

“Particularly in the offshore sector, reliability is the essential thing,” said Winergy CEO Aarnout Kant. “With this medium-speed gearbox concept, we are demonstrating our technological expertise and innovative strength. The integrated drive system is not only very compact and efficient, it is also extremely reliable. It makes us proud to be Adwen’s partner on this showcase project.”

The dimensions of the gearbox designed for the AD 8-180 wind turbine were showcased at WindEnergy in Hamburg, Germany, in September.

For more information, go to www.adwenoffshore.com 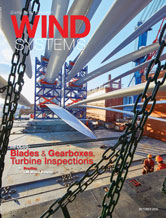 Cyberhawk Reports Strong Year of Growth in the Wind Sector