Together with 14 project partners, Fraunhofer IWES, in the role of coordinator, recently launched the BladeFactory project. The research project, which has been funded by the German Federal Ministry for Economics Affairs and Energy (BMWi) to the tune of 7 million euros, is set to last 3 1/2 years. During this period, IWES researchers will develop and test production methods with the aim of reducing the production time for rotor blades. To this end, the team is working to parallelize production steps. In addition, a 3D laser measurement system, which is suitable for assuring the quality of blade production, will be tested for the first time. Development work will be performed at IWES’ demonstration center for industrialized rotor blade production in Bremerhaven, Germany. This site was established within the framework of the preceding BladeMaker project.

Using the technology presently available, it takes about 24 hours to produce a rotor blade blank. The process is protracted since almost all production steps must be performed one after the other in the main mold tool.

“To shorten the production time, we want to perform various processes simultaneously and move some of the work away from the main mold tool to other devices,” said the project’s manager Roman Braun. This includes procedures such as preforming (placement and draping of the textile and core materials) and prefabbing (preproduction of rotor blade components).

Another goal is quality enhancement: In order to achieve greater, reproducible component quality, the researchers at IWES rely on measuring technologies and mechanical tests during the manufacturing process. In addition, the use of a laser measurement system is planned, which will precisely record the 3D geometry of the finished parts.

“The introduction of robust and parallel production processes offers huge potential cost savings,” Braun said. “The production procedure is rendered more efficient and material surcharges as well as reworking due to quality issues can be reduced.”

A direct production procedure for mold tools was developed in the scope of the preceding project, BladeMaker. This has reduced the production time for molds from six to three months. In the BladeFactory project, researchers now aim to use this production procedure to create mold tools with a cooling function. This will enable the curing process to be optimally controlled and shortened, while also increasing the quality of the components. The more rapid manufacturing of mold tools accelerates the market launch of rotor blades significantly which results in a decisive competitive advantage for manufacturers.

The demonstration center is open to project partners and industry customers. Material manufacturers, machine suppliers, and blade producers use the infrastructure and know-how offered by Fraunhofer IWES to test materials and tools for blade production, perform demonstrations to potential customers, and conduct tests according to accredited methods. 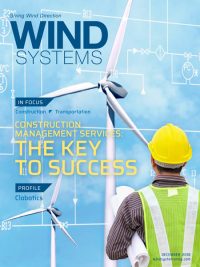