There was a time not too long ago when starting a business as an independent service provider (ISP) in the wind industry was as easy as hanging a shingle. Wind was new and exciting; money could be made and the explosive growth made huge demands of the supply chain. Since the industry was in its infancy, not many standards were in place requiring third-party service providers to show credentials or prove that they had experience providing maintenance and repair services working on anything, let alone wind turbines. Figure 1

Times have changed. Many of the start-up companies that tried their hand at wind services are no longer around, and that may not be such a bad thing. Some of these companies were started and run by true opportunists, out to take advantage of a fledgling industry still learning how to walk. These companies regularly made commitments that they couldn’t keep, hired workers that weren’t properly trained to perform the work, nor were they prepared to complete the work to the safety standards expected from the power industry.

Though the wind industry is still young, it’s maturing quickly. Wind farm owners and operators have become smarter over the past several years in regards to contracting for maintenance services. They screen providers more rigorously and weed out the ones that don’t measure up. More and more of the nation’s wind fleet are falling into the asset portfolios of energy companies and utilities. Figure 2

These owners may be new to wind but are very experienced at asset management and are savvy when it comes to awarding any type of service or repair contract to companies where staffing, experience, parts acquisition, and financial stability could leave their assets at risk. To mitigate that risk and manage cost, owners have taken different approaches, what works for some doesn’t work for all. Take for example the model of self-performance; several companies are moving in the direction of not only managing the asset but operating and maintaining the equipment as well.

Some companies have been successful with this approach while others continue to experiment. This may work for asset owners who have economies of scale, but smaller owners need to rely on proven service providers to help them. Others have tried their hand at self-performing to one degree or another and have come to the conclusion that leaving maintenance and repair services to companies that specialize and have built a reputation providing these services is their best option.

WindIngen, a division of MD&A, was launched to support these customers. Starting WindIngen (the ‘-Ingen’ part is short for ‘ingenuity’) was a logical move for MD&A, since many of their existing customers were expanding their portfolios to include wind.

MD&A (Mechanical Dynamics and Analysis) has been providing service and maintenance in the power generation industry for more than 30 years and has grown to be one of the largest independent service providers in the United States with more than 400 employees. MD&A’s intention with WindIngen is to offer both new and long-time customers the same level of quality service in wind that they’ve come to expect from MD&A in traditional power generation.  Drawing on decades of experience and relationships, MD&A is leveraging their experience in power generation marketplace.

While the industry realized some considerable growth during 2006 through 2010, and lots of new people came into the wind industry, most came up through the ranks. Few moved to wind from traditional power. As such, wind asset managers and operations personnel did not have relationships with their counterparts in traditional power, even within the same company. Many still don’t.

MD&A’s WindIngen division started in June, 2010—a tough time for any company to get a start in the wind energy industry. MD&A could rely on a strong reputation in service, but would not be entitled to anyone’s business. With the number of companies already in the space, many of whom were struggling to keep their teams busy, prices were and continue to be artificially low. Some companies have left wind and others are showing weakness. Starting a new service business in the wind service business is further challenged by the industry’s general financial dependence on the Production Tax Credit (PTC). The PTC had been extended through the end of 2012. However, as the expiration deadline neared, uncertainty loomed in the industry regarding the PTC’s renewal. Projects that were not already under construction stalled in the planning phase. Margins were under significant pressure, industry momentum had slowed to a crawl and owners were also under significant cost pressure. It was difficult to get owners to try a new company when many were still reeling from wounds suffered from poor service providers between 2005 and 2010. At the same time, OEM’s were placing a larger focus on service. If they weren’t going to be selling turbines until the recession ran its course, they would have to work harder to increase market share in post-warranty service.

In short, WindIngen could take nothing for granted. They would need to work hard to overcome the stigma of being the new guy on the block, and become recognized as a bona fide and qualified ISP in the industry. WindIngen would have to prove all over again to many MD&A customers—to whom they had been providing service to for decades—that they could be trusted to service, maintain, and repair their wind equipment at the highest level, especially during a time of stymied growth and with stronger competition from the OEM’s. They knew that they could do that if they continued to operate under the company’s core philosophy of sticking to what you’re good at: providing high quality service. Figure 3

In the three years that MD&A has been providing service in the wind industry under the WindIngen name, they have steadily built a reputation of providing quality service primarily through project type work.

One specific example of how the company draws on MD&A’s experience occurred when MD&A was asked to perform some unusual electrical testing on generators as part of extensive EOW inspections. While the technicians understood the test procedure, they wanted to make sure that the test was conducted properly in the field and the data was reliable. Figure 4

WindIngen contacted the generator division of MD&A, located in St. Louis, and discussed the test procedure with one of the experienced engineers that specializes in generators. To ensure that the test was conducted properly in the field, the engineer was trained in climb safety and accompanied the team uptower for the first few tests. The test was conducted safely and the customer was impressed with the commitment to quality and the resources at WindIngen’s disposal. Figure 5

In the three years that the division has been around, they’ve worked diligently to bring the same level of quality, service, and professionalism that customers have come to expect from MD&A. The feedback received from customers regarding the level of safety, communication, job knowledge, work ethic, and professionalism displayed by WindIngen field technicians has been consistently positive, and has brought the division many repeat opportunities with customers. Figure 6

Additionally, WindIngen offers site O&M services and they’ve been working toward landing their first site O&M contract. Owners are rightfully careful when selecting for company for this type services. Selecting a provider that can be trusted to perform all aspects of site operation from making availability a primary concern to procuring and managing parts, unscheduled maintenance, and major correctives, while making safety a part of the daily work culture. Figure 7

MD&A has proven over the years to be resourceful in meeting their commitments and the needs of their customers. This resourcefulness has allowed MD&A to become a force in traditional power.
WindIngen will get its chance at O&M services as they continue to increase their presence in the industry. Several of the issues that smaller ISP’s face in regards to being accepted by asset owners as viable alternative to larger ISP’s and OEM’s, MD&A already has covered:

• Financially, MD&A is strong and owners will conclude that the financial risk to their assets is mitigated.
• MD&A is not new to acquiring or creating parts for power generation equipment. The company owns two parts businesses and will leverage that experience to identify sources for parts and consumables.
• With regards to staffing, MD&A/WindIngen offers wages and benefits that are above the industry average. The company has a low employee turnover rate and an ability to source experienced technician staff in short order.

MD&A’s success over the years has come from providing service in the power generation industry. They will make their mark in wind as owners come to understand who they are, where they’ve come from, and how they meet the commitments to their customers.  Figure 8 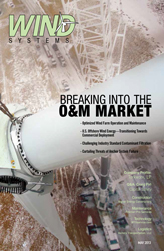