Carbon brushes are a small but crucial part of a wind turbine. Carefully selected brush grades, in combination with slip rings and intelligent brush holders, protect the turbine against lightning and the bearings against parasitic currents.

Special features of these materials include good thermal and electrical conductivity and a low friction coefficient. Carbon doesn’t have a liquid phase, but sublimes at 3500°C, so that there is no welding with metals. That feature makes carbon superior to other materials as a material for electrical sliding contact. Carbon ceramics are basically mixtures of defined carbon containing raw materials with organic binders. By means of different forming procedures, components of almost every shape and size can be fabricated (Figure 1).

At a subsequent temperature treatment up to 3000°C, the green bodies get their characteristic properties. With a temperature treatment up to 1000°C the materials are called carbon-graphite, and at a final temperature of 3000°C the result is electro-graphite. Besides graphitic components, metal-graphite contains metals such as copper or silver. Additional treatments involving impregnations with resins or metals allow further modifications of the physical properties.

The materials can be adjusted to all possible field conditions by means of using different raw materials, their conditioning, and by different shapes. The good thermal properties are useful in semiconductor manufacturing and for continuous casting. Burner nozzles for rockets or brake linings for automobiles and aircraft are future-oriented developments. Carbon components prove themselves as replacement for asbestos in the glass industry. The special tribological properties also show their advantages in sleeve bearings in pumps. Carbon-reinforced fiber materials rank among those with great future potential due to its high stiffness and thermal characteristics, and using such grades in medical applications is just beginning.

Applications for Carbon Brushes
In the following passage numerous applications for carbon brushes on wind turbines are described, along with potential problems and approaches to solutions (Figure 2, Figure 3).

Generator Brushes
The majority of wind turbines are fitted with doubly fed induction generators (DFIG). The main application for carbon brushes on wind turbines is the current transfer on the slip ring of these generators (Figure 4).

From the extreme cold of Inner Mongolia or North Dakota to the heat in desert areas, wind turbines are exposed to harsh environments. Additionally, there are other challenges like changes in wind speed, low humidity, and on/off cycles of the generators, etc. Actually, the carbon brush is only a small part of a wind turbine, but a very crucial component for efficiency, maintenance periods, and output.

From the standpoint of carbon brushes, there are three core components for the current transmission: the carbon brush itself, the slip ring, and the brush holder with a spring system. Actual carbon brush grades consist mainly of graphite and metal powder, usually copper, and with a metal content of 40-60 percent. For difficult cooling conditions, even brush grades with a high silver content are in use. Additives and after-treatments allow adaptation to these conditions, especially low humidity. The grade selection and number of brushes depend on the rotor current, the cooling and ambient conditions, and the slip ring material as well.

During the past 10 years the industry has gone to great lengths to improve the brush performance and shorten maintenance intervals. Meanwhile, even the harshest environment is no problem for carbon brushes. The slip ring material (Figure 5) is stainless steel (e.g. X20Cr13 ) or bronze (e.g. GBz10).

Although the surface speed is in the normal range for carbon brushes, the rings are helically grooved to guarantee safe contact and to improve the cooling of the slip ring surface. During operation a protective film is formed on the slip ring surface, called a patina. This thin film is crucial for the current transfer and the friction behavior of the carbon brushes. The patina consists of oxides of the ring material, humidity, and graphite from the carbon brush. Any interference of the film formation process has a negative influence on brush performance. That, for instance, is ambient temperature, surface temperature of the ring, current, humidity, presence of oil or dust, and state of the ring surface, etc. An initially sufficient surface roughness (5-8µm Rz, 0,8-1.2 µm Ra) supports the film formation.

Slip rings are available in different designs: assembled, or molded. The diameter and size is a function of the rotor current. Variants up to 1500 amperes exist. Intelligent brush holder systems support the brushes in their function. Massive and stable, cast brush holders are the current state of the art. Referring to them as “intelligent” means that the holders have a brush wear monitoring device included. Holder systems with helical tension springs allow brushes with 100mm length and a brush lifetime of more than two years. The single holders are normally pre-assembled on brush rockers (Figure 6). Each component of the current transmission apparatus can also be adjusted for offshore usage.

Grounding Brushes
A special application for carbon brushes is the discharge of ripple voltages. Ripple voltages can arise due to different factors, with electrostatic effects on the electric circuit and backlashes of the inverter being the main reasons. Despite constructive measures ripple voltages or parasitic currents are not completely avoidable.

For shaft grounding, a double brush holder with two grounding brushes is usually used. The standard carbon brush design is a so-called sandwich design made of a silver metal and graphitic brush grade. The silver grade is for grounding the graphite parts, for film formation on the shaft, and the removal of existing oil. It has to be certain that in the turning direction of the shaft, the graphite layer is always in front of the silver layer.

This brush design is a safe solution, but also the most expensive one. Therefore, cheaper brush designs such as metal impregnated grades or metal graphite grades exist. The applicability has to be checked case by case (Figure 7).

Lightning Protection
Lightning strokes are a wind turbine’s worst enemy. Due to their height of over 100 meters, and mostly located in remote areas, wind turbines are exposed to lightning strokes up to 10 times a year. Wind turbines have the specialty that the blades and the nacelle rotate and change position during their function. Significant amounts of lightning current passes through or near to all wind turbine components, and it also passes electronic equipment containing control or measuring devices.

Besides systems based on lightning conductors, carbon brushes and brush holders are used to protect the bearings and the parts behind it, i.e. the gearbox and generator. They should allow the current to bypass the bearing, instead directing it from the blade via the shaft to the tower and then to the ground. Standard brush designs can carry up to 200kA during a lightning stroke. Lightning protection brushes are not only used on turbines with DFIG generators, but on turbines with synchronous or induction generators as well (Figure 8).

Pitch Control
Pitch control motors are DC motors with standard brush grades. Because of the low speed and short operating intervals, the lifetime of these carbon brushes is extremely long.

Hub Control Slip Rings
The hub control slip ring is used for communication between the generator and the pitch control unit. Modern wind turbines adjust rotor blade pitch angle for two important reasons, safety and control. The control function improves turbine efficiency by adapting the blade aerodynamics to wind conditions. The safety function performs as an aerodynamic brake and rotates the turbine blades to a non-rotating (feather or stall) condition in wind speeds that exceed safe rated speeds or in other fault conditions. These slip ring units consist of a high voltage part and a low voltage/low current part for data and signal transfer. Gold wire technologies are commonly applied for current transfer. Due to increasing demands (blade heating) and increased blade size, however, this technology hits the wall, so the “old” brush technology enjoys a revival in this application. Silver brush grades are the main choice when it comes to data transfer as well as power supply.

Auxiliary Drives
There are also some minor applications like pumps driven by induction or DC motors using carbon brushes.

Maintenance Checklist
Brushes, holders, and slip rings must be checked regularly. A problem detected at an early stage can be addressed before failure occurs. Recognized too late it may give rise to heavy damages, stopped turbines, and expensive repairs. The following should be used as a checklist for regular inspections:

Carbon Brushes
• Brush length: Too-short brushes should be replaced.
• Shunts: Discolored shunts are an indication for uneven current distribution, possibly caused by different brush temperature. It is recommended to replace the complete brush set, since single brushes could already have a defect. If shunts are frayed by vibration, they should also be replaced.
• Vibration markings: If carbon brushes show a shiny side-surface it is an indication of radial movement of the brushes in the brush box. This can be caused by out of round slip rings, bearing failures, or a too-smooth ring surface. If the side surface shows markings of current, the connection between brush and shunt could be damaged.
• Brush contact surface: Rough, broken contact surfaces may appear in the case of brush sparking. Brush sparking of the power brushes is a rather rare phenomenon, while sparking of the grounding brushes is observed quite often.

Brush Holder
• Brush box: It must be ensured that brushes can move freely.
• Electrical connections: All electrical connections must be fitted accurately.
• Springs: The holder springs should be checked in longer periods. Springs with a deviation of more than 10 percent from the nominal value should be replaced.
• Brush holder distance: It is important for a proper guiding of the brushes in the brush box, and that the distance between holder and ring is 2-3mm.

Slip Rings
• The slip ring surface should be checked with a strobe light for damages. The surrounding should be checked for oil. If bearing grease or oil gets to the ring or commutator surface, it forms an insulation layer hampering the current transfer and leads to high brush wear. The porous brush material absorbs the oil. So in case of an oil leakage, all brushes should be replaced.

Flashover Markings
Heavy brush dusting and the deposition of brush dust on the insulators of the brush holders are the main reasons for flashover on the power slip rings, so it is essential to remove brush dust regularly. That must be carried out with a sucking method, not with a blowing method. Slip rings with a flashover mark must be replaced on the spot. 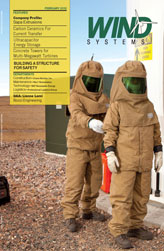 An Alternative Design for Speed Increasers