Vibration analysis is the most widespread monitoring technique used in wind turbines, and on a typical basis, it is the first and primary technology that operators tend to refer to. It is applied to rotating components — in particular, the main bearing, gearbox, drivetrain, and generator — where the direct and indirect costs of failure can be critical to O&M budgets. Signals from vibration sensors are monitored in real time using software-based techniques, such as Fast-Fourier Transforms, and can be compared against a signal recorded during known healthy running operations, which, in many circles, is referred to as a machine fingerprint.

Complex algorithms are then established over a predetermined time with the goal in capturing said faults and other anomalies before substantial damages can develop or occur. It is here when the other technologies — such as the oil and grease analysis, filter examinations, and detailed inspections (including the use of borescopes) — confirm which vibration has been detected and can be employed. Analysis can help to identify defects in these components, allowing maintenance timings to be anticipated, especially when used in conjunction with historical data on past failures.

These windows for repairs can therefore be scheduled long before the risk of catastrophic failure and are often fitted into periods of low wind conditions when generation losses can be kept to a minimum. Wise and savvy reliability engineers and managers are constantly aware of the staggering amounts of data captured and recorded ultimately at their disposal in an ever-increasing arsenal of tools designed to assist in proactively addressing these failure modes before a catastrophic event occurs. With the number of turbines approaching end-of-service warranty, a great deal of opportunity awaits companies that are able to approach O&Ms with the ability to offer these tools to them that were most likely utilized by the OEM and their dedicated service providers only days and months before. In my experience, I have witnessed a gap in monitoring responsibility and the lack of a detailed plan for monitoring transference many times. Having said this, many reputable organizations exist in the world of condition monitoring (CM). End users are able to employ a plethora of tools, using a variety of companies and vendors, as well as in-house resources.

Many would agree there are a hundred ways to approach condition monitoring (CM) with the sky being the limit in the ways to track and report incidents discovered. To illustrate, I have added a few examples with all identifying information removed that showcases the value-added information that can be in the palm of your hands. The following questions remain: Are you using it, is it available, do you understand it, and are you willing to pay for it?

CM is based on advanced signal analysis on various signals such as vibration, strain, and process signals in combination with automation rules and algorithms for generating references and alarms. The system has a high degree of built-in automation presenting the conditions and alarms in a condensed form to the operator. An expert has the possibility to dig into measurements and alarms by using an advanced data mining tool. Configuration of the system is based on a template philosophy, so it is possible to configure a large number of wind turbines in one operation. Alarm limits are automatically generated by the system based on expert rules. In addition, the overall system has a system daemon, watching and ensuring that all parts are up and running, which is important in the reduction of human intervention. 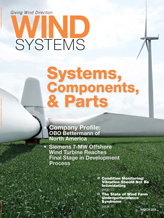 Crawler Cranes Use Tandem Lifts to Remove Blades from Turbine