Nothing is simple when dealing with tiling issues on wind facilities in certain portions of farm country. They are almost never surface located as part of a typical “one call” or underground utility location service. Most, if not all, of the tiles are poorly mapped and cannot be identified until they are encountered in the field. Failure to identify underground tiling issues will result in negative landowner relations, and could potentially add tens of thousands of dollars to pay for avoidable crop damages. The key to minimizing issues with tiles is to start with a good plan and then work that plan as the project progresses and beyond.

The first step in the plan is to identify the possible locations you are likely to encounter tiling and recognize the importance of avoiding them or repairing them quickly. Tiling is usually very prevalent in the Midwest or in areas where the soils are typically heavy (clay based) and the overall terrain is relatively flat. Pattern tile systems are named as such since they usually form back and forth patterns typically laid out in the same direction as the crops planted above them. Depending on soil types and conditions, these tiles are buried three to five feet deep and are usually spaced parallel to each other, anywhere from 35 feet to 100 feet apart. At the ends of the fields they usually connect into a perpendicular main line, which then collects all of the subsurface water and allows it to discharge into either a drainage ditch or waterway. They may also link up with even larger main tiles that may be part of a water district or county drain tile system.

A single main line tile can service anywhere from several hundred acres up to several thousand if it is part of a drainage district or county tile system. Paying for severe crop damages that may likely extend off the established wind farm boundaries can be both politically and financially challenging. Many times the actual crop damage costs can be difficult to calculate and determine equitably.

The second step is to spend as much time as possible researching the areas that you intend to place the turbines, in addition to any areas where you may run the underground collector system or establish crane/equipment paths. The landowners and/or tenant farmers are the best place to seek information since most maintain firsthand knowledge of the size, type, and general location of the tiles on their property. While the maps they provide are usually not accurate from a surveying degree, they do provide precise details as to how many tile runs exist in a particular field and the general direction they are running. Utilizing that information, it may be possible to slightly adjust the layouts of a wind facility where it makes economical sense, such as running a slightly longer collector system that goes parallel with a pattern tile system versus perpendicular to it. Several thousand dollars of additional collector cable can be far cheaper than repairing multiple tile breaks and reimbursing crop damage. At a minimum, the information can be provided to the construction crews so that they can stay vigilant on the lookout of any suspected tiles in the construction zone.

Finally, utilize construction methods that minimize the impacts to existing tile systems. When laying collector and underground cabling near tiles, you want to use open trenching methods if at all possible. When cable is “plowed” the operator will have no idea if they damaged underground tile until drainage issues start appearing on the surface. Finding and repairing tile breaks in the vicinity of an energized collector cable can be a very time consuming and expensive undertaking, especially if you encounter an unknown pattern tile system.

Whenever possible layout access roads, haul roads, and crane paths in the same direction as the crops planted on the surface, which will help to minimize the overall amount of times you may encounter a tile. Most modern farm machinery is designed for low ground pressure and typically will not crush the underground tiling systems. However, modern construction equipment is designed for maximum traction and with crane weights exceeding 500 tons, it is safe to assume that most tiles that are crossed in the course of construction will be damaged and will require some sort of repair. Understanding the importance of field tiles and identifying ways to mitigate issues will help to improve landowner relations and lower overall construction costs. 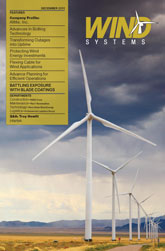