“Today’s announcement builds on Interior’s work to stand up a sustainable offshore wind program for the Atlantic Coast,” said Cruickshank. “We look forward to working with Deepwater Wind to bring this this offshore infrastructure project to fruition.”

Once both the agency and Deepwater Wind have agreed upon the terms and conditions of the grant, BOEM will send the grant to Deepwater Wind for execution, and the company will be required to pay the first year’s rent and provide financial assurance. Once executed, BOEM will finalize its review of Deepwater Wind’s General Activities Plan, which describes proposed installation activities and conceptual decommissioning plans for the transmission system. The General Activities Plan would be the first approved for an offshore wind energy project for a transmission system in Federal waters.

The majority of the activities and permanent structures related to the Block Island Wind Farm will be sited in state waters and lands, making the U.S. Army Corps of Engineers the lead federal agency for analyzing the potential environmental effects of the project under the National Environmental Policy Act (NEPA). As a portion of the proposed project would be located on the federally managed Outer Continental Shelf, the project must secure a ROW grant from BOEM before proceeding. BOEM has participated as a cooperating agency in the NEPA analysis and associated consultations led by the Corps.

In September 2014, the Corps completed an Environmental Assessment (EA) for the Block Island Wind Farm and BITS, and issued a Finding of No Significant Impact. Before adopting the EA, BOEM conducted an independent review of the EA and determined that no reasonably foreseeable significant impacts are expected to occur as the result of the preferred alternative, or any of the alternatives contemplated by the EA. On October 27, 2014, BOEM issued a Finding of No Significant Impact for the issuance of a ROW grant, and approval of the General Activities Plan, with modifications. 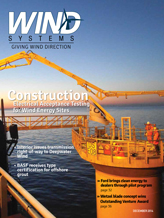 Proving Out A New Method For Installing Offshore Wind Turbines