Congressman Mac Thornberry commented, “Our country has been blessed with incredible natural resources that offer us the chance to increase production of all kinds of energy here at home. It is encouraging to see folks in Deaf Smith County using some of these resources to generate good jobs.”
“Those of us from the Panhandle know that wind is part of our everyday lives; leave it to the folks at EDF Renewable Energy to harness that energy making the wind an important aspect of our economy,” said State Senator Kel Seliger. “This project is also a result of smart long-term planning by our state. We need to stay the course for our communities and all Texas consumers.”
Texas continues to leads the nation in installed wind capacity, due to robust wind resources, a business friendly environment, and supportive stakeholders at the state and local levels. The Hereford Wind project represents EDF Renewable Energy’s confidence in the next wave of wind power’s growth and construction in the state and increased investment in Deaf Smith County.
“We applaud the State of Texas for its vision in designing and implementing the CREZ transmission build-out over the past eight years,” commented Ryan Pfaff, Executive Vice President of EDF Renewable Energy. “CREZ has served to unlock the rich wind resources of the Texas Panhandle and West Texas for the benefit of millions of Texans, in the form of competitively-priced, clean energy from projects like Hereford Wind.”
Pfaff added, “We encourage Texas to stay the course and complete the remaining, planned CREZ transmission upgrades in the Panhandle, unlocking some of the State’s most economical energy resources in the process.”
As part of EDF Renewable Energy’s community engagement program the company presented the Deaf Smith County Crisis Center with a $2500 donation.
Following on from the Spinning Spur (161 MW) and Bobcat Bluff (150 MW) projects commissioned in December 2012; and Spinning Spur II (161 MW) commissioned in 2014, Hereford Wind is EDF Renewable Energy’s fourth operating project in Texas. The company has two additional wind projects in construction, eventually boosting the Group’s installed capacity in the state to over 1 GW. 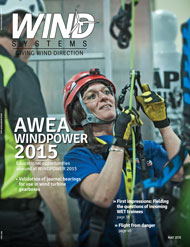 Mortenson to build $140M wind projects in Illinois in 2018

Proving Out A New Method For Installing Offshore Wind Turbines