New wind farms added more than a quarter of total new power generation capacity in the United States between 2010 and 2014, reaching 75,000 MW at the end of last year. With the exception of China, no other country has more.

However, despite America’s abundance of coastline, its wind farms spin exclusively on shore. But that’s about the change. America’s largest wind turbine manufacturer, General Electric (GE), just finished the installation of the platforms that will support the first offshore wind farm in the United States. The wind farm, built by Deepwater Wind and located 3 miles off the coast of Block Island, Rhode Island, is scheduled to come online at the end of 2016 and generate 125,000 MWh of electricity. That’s enough to meet 90 percent of Block Island’s power needs.

GE recently celebrated the milestone at a plant in the Port of Providence in Rhode Island where it will assemble the towers for the wind turbines. Rhode Island Governor Gina Raimondo, Deepwater CEO Jeffrey Grybowski, and Anders Soe-Jensen, CEO of GE Renewable Energy’s Offshore Wind Activity, were present.

But a lot of the action is already taking place on the other side of the Atlantic. The wind farm will use five huge Haliade wind turbines, which GE acquired with Alstom last fall and manufactures inside a new plant at the mouth of the Loire River in Saint-Nazaire, France. Each Haliade can generate 6 MW, enough to power 5,000 American homes and save 21,000 tons of CO2 during the turbine’s life cycle. The turbine has a 150-meter diameter rotor that sweeps over an area large enough to fit nearly two Airbus A380 double-decker passenger jets.

The Saint-Nazaire factory opened in 2014 and currently employs 170 people. Besides the Haliades, it also manufactures turbine nacelles — the casings that shelter the power generation equipment on top of the tower — and generators.

The first Haliade produced by GE recently left the factory for Denmark where it will be installed on the Osterild site operated by the utility EDF Énergies Nouvelles (EDF EN). The utility will use 238 GE offshore wind turbines for its three French wind fields in Saint-Nazaire, Courseulles-sur-Mer, and Fécamp.

Workers in Saint-Nazaire will also make the five Haliades for the Block Island wind farm in the U.S., as well as 66 Haliades for Merkur Offshore, a large offshore wind project in Germany.

GE is also offering wind farm operators access to the GE Store, which allows the company to quickly share knowledge, technology, and innovation across its businesses. Deepwater Wind, for example, is pursuing battery storage from Current, a startup powered by GE, for its proposed 90-MW, 15-turbine Deepwater ONE – South Fork project for Long Island, New York. The battery solution will stabilize the grid and maximize utilization of the energy provided by the offshore wind turbines.

Batteries solve one of the key challenges currently facing renewable energy producers. It allows them to store excess power generated when it’s windy and release it during peak demand.

“This solution will help the South Fork meet its energy needs in an affordable and sustainable way,” said Pratima Rangarajan, general manager of storage for Current.

Power transmission from the sea on shore presents another hurdle. That’s where GE’s Energy Connections business comes in. Connecting offshore wind farms to the grid requires the installation of an offshore electrical substation. The unit’s high voltage direct current (HVDC) lines can efficiently transmit power over long distances of 50 km or more.

The 900-MW DolWin3 HVDC project in the German North Sea is a great example. As part of this project, GE recently installed a pair of advanced transformers manufactured in Mönchengladbach, Germany, for use in the onshore substation. Each transformer, equipped with a tap changer, allows the operators to level out voltage fluctuations and keep power flowing even if one transformer goes off-line.

For more information, go to www.gereports.com. 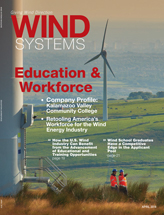 Vestas To Supply 298 MW For Kingfisher Wind In Oklahoma