The wind industry has experienced a rapid expansion. As wind farms are aging, their operations and maintenance issues are gaining in significance. The wind industry has been affected by failures of wind turbine components such as main bearings, gearboxes, and generators. Replacement of failed components results in the high cost in energy production. Therefore, research in fault identification and condition monitoring is warranted. In this study, detecting wind turbine gearbox faults based on vibration acceleration data provided by the National Renewable Energy Laboratory (NREL) has been investigated. Data mining methods [1, 2] are applied to identify the faults in the time domain.

NREL Gearbox Test Facility
The data used in this research originate from a damaged gearbox of a test wind turbine. The gearbox was retested at the Dynamometer Test Facility (DTF) at NREL. To retest the gearbox, the complete nacelle, and the drive train of the test wind turbine were installed at the DTF. The nacelle was hard fixed to the floor without hub, rotor, and yaw bearing. Figure 1 shows the diagram of DTF.

Data Processing
To analyze the gearbox vibration in the time domain, jerk is utilized. Jerk describes the rate of acceleration change, and it is often used to indicate the excitement of vibration. For the high-frequency vibration acceleration data in Section 2, the jerk is approximated in (1).

where J is jerk, a is acceleration, t is the time index, and T represents the sampling interval.

Since the sampling frequency is high (i.e., 40 kHz), the number of data points within 10 min length is large. Therefore, vibration, the high-frequency jerk data (40 kHz), is then converted into much lower-frequency data (1/15 Hz) by computing the mean of jerk at 15-s intervals. The standard deviation and the maximum value of the jerk data in each 15-s interval are also computed.

Fault Identification Methodology
In this section, clustering analysis [1] is utilized to investigate the failed components in the gearbox. Clustering analysis is an unsupervised method of data analysis. Clustering algorithms group observations into clusters by evaluating similarities among the observed data. The component failure can be identified by examining the pattern similarity of the jerk data measured by accelerometers mounted at different locations of the drivetrain.

The clustering analysis aims at grouping data from 12 sensors using the jerk data. The time series of the jerk described in the previous section are utilized in the clustering analysis. The k-means algorithm [3] is modified in this study to establish clusters. In the original version of k-means algorithm, the number of clusters, k, should be arbitrarily set by the analyst. In this study, a clustering cost function is introduced to evaluate the cluster quality with k.

The results of clustering analysis for Cases 1 and 2 are the same and illustrated by Figure 5. As shown there, the 12 accelerometers are classified to three clusters according to the modified k-means algorithm. In Cluster 1, most of the sensors sense the vibration acceleration of the gearbox low-speed stage. Cluster 2 contains data from two sensors that monitor the acceleration of the main bearing. Sensors that measure the vibration acceleration in the intermediate- and high-speed stage make Cluster 3. To further analyze the data in the three clusters, the Euclidean distance between the centroids of clusters is calculated. The shorter the distance, the more similar the two clusters are. Figure 6 demonstrates the cluster distances for Cases 1 and 2, respectively. 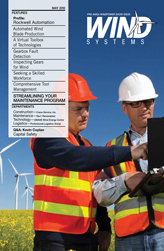 Is Your Fall Protection Equipment A Silent Hazard?

Thinking Outside the Gearbox