Most of us understand that wind turbines are ideal lightning attractions, and that grounding turbine systems is critical to avoiding catastrophic damage. Lightning is such a threat to wind turbines that it likely isn’t a matter of if one will be struck, but when. The cost of replacing circuits in the nacelle, transformer, and elsewhere is hard on O&M budgets. But what grounding solution makes the most sense for wind farm developers and turbine makers focused on material cost reductions and reliability? Solid copper wire has long been deployed because it is known as an excellent electrical conductor. However, it isn’t always the only or most appropriate answer. Substantial price swings and problems with theft can make copper a liability. That’s why some wind turbine and wind farm developers are exploring the benefits of less expensive bi-metal copper clad grounding wire/cable.

Material cost reductions and reliability continue to be a concern for wind farm developers and turbine makers. Most engineers are familiar with solid copper grounding wire/cable, which has been used around the world for many decades as the primary choice in grounding conductors. In increasing numbers utilities, municipalities, and electrical co-ops are switching to BiMetal copper-clad cable for grounding their towers, substations, and foundations. The utilities have experienced industry-wide problems with solid copper wire/cable theft, resulting in substantial maintenance costs going beyond the replacement cost of the wire/cable. Additionally, when the solid copper cable is cut from its site/tower, not only do service personnel risk severe injury, but system reliability is jeopardized as well.

Solid copper wire and cable has been used as grounding, or “earthing” wire for power, telecommunications, wind turbines, solar panels, gas lines, buildings, bridges, homes, and many other structures needing to dissipate lightning strikes to the ground. Solid copper wire has long been known to be an excellent electrical conductor, and the operative word here is “long,” referring to timing, but not necessarily the most suitable. Copper has experienced significant demand and price fluctuations on the open market in the past decade, and it is a highly tradable commodity used in products from printed circuit boards to wire to jewelry and  many other places.

There are other choices in grounding wire material types that can lead to cost reductions while ensuring long-term circuit/equipment protection. Solid copper has experienced substantial price swings, over 200 percent in the past year alone. Such price volatility can be minimized and cost savings applied to the installation of grounding wire/cable throughout the wind plant, from blades, to trenches, to wind farm substations.

Some careful buyers have learned that there are alternatives to solid copper grounding wire. “Why pay for 100-percent copper when 40 percent conductivity will work just as well due to skin effect?” asks Bruce Hammett, president of WECS Electrical Supply, Inc., and a 25-year veteran of the wind power industry.

Metallurgically bonded copper to steel, sometimes called copper clad, has been used in telecom, cable TV, and in electric utilities for grounding wire. Utilities today are most concerned with thieves climbing onto their property, cutting the solid copper away and taking it to scrap dealers for cash. While this is not yet a well-known problem for wind turbines or wind farms, that doesn’t mean the thieves won’t find them to be a good supply source in the future. As the copper on utility power poles and substations gets converted to copper-clad grounding wire, expect the thieves to find it in wind turbines next.

There are a few companies that have been producing copper-cladded wire and cable for several years. A recent addition to this list is CommScope, a U.S. telecom accessories manufacturer now reaching out to the wind and utility industries that has named a division, BiMetals, as a reference to the metallurgically bonded copper-clad wire/cable it produces. Some companies try to copper-plate the wire. This lacks the purity of a metal bonding environment to provide a highly bendable and durable copper skin. Due to the long-term vibration, fatigue or bending requirements of most of the cable used in turbines and wind farms, it is best to stay away from a plated copper wire/cable.

Today’s copper-clad wire is metallurgically bonded to a steel or aluminum core. The aluminum core is the same material used for power cable—center conductor. However, the power cable is for a different application than discussed in this article. The optimum strength, “bendability,” and fatigue capability of copper-cladded grounding wire is achieved with heat-pressure bonding in an inert gas environment under highly controlled heating and cooling operations. Examples of fatigue and bend test comparisons can be seen in fig. 1a–fig. 1b.

There are some issues, however, such as size, weight, and flexibility that require adaptation or acceptance when compared to solid copper. In order to accomplish the same current carrying capability, there may be small size increases when using copper-cladded steel wire vs. solid copper. For example, copper solid grounding wire, a 2/0 7W at 0.365” diameter will require a size 7 strand #7 AWG copper clad steel 40 percent conductivity at 0.433” diameter, or a 16 percent increase in diameter. Examples of conversion can be seen in Figure 2.

To the degree change can be implemented, this copper-clad technology is available now. To change standards and begin using copper-cladded steel for grounding wire, engineers should check the DC resistance and fusing currents to select the proper size of wire compared with solid copper. Fig. 3–Fig. 4 show fusing current comparisons of solid copper wire and copper-clad wire from one manufacturer.

There is one other important point contributing to cost controls. The purchase cost of copper-clad wire is likely to be less for equivalent quantities, as there is less copper in such wire, which is acceptable due to the “skin effect” phenomena. Costs of specialty metals are likely to remain volatile, and one of the best ways to safeguard against theft losses and the high costs of purchasing copper wire is to use copper-cladded steel for grounding applications. Last year, as copper prices increased along with other commodities, the absolute dollar savings with copper clad grounding wire became substantial. Copper prices have moderated in the past six months, along with other commodities, but have already begun increasing this year and are expected to increase further. The cost benefits of using copper-clad grounding wire exist with both the initial purchase stage as well as the O&M costs related to theft and longevity. With so many concerned with making harvesting wind energy as cost-efficient as possible, maybe it’s time for you to consider a change in grounding wire/cable. 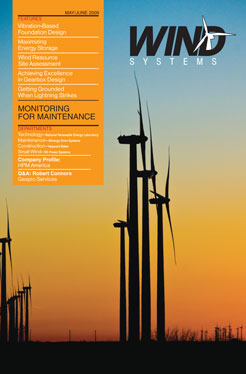