Main shaft bearings are a critical component in the driveline of a wind turbine, and selection of the right lubricating grease is essential in the prevention of premature bearing damage.

Wind power is advancing rapidly. From the ongoing proliferation of onshore turbines to an increasingly attractive offshore market — where technological advancements have made it more feasible than ever before to bring highly powerful farms online — there is opportunity to be seized.

Getting the most of that opportunity requires reliable operation and dependability in every critical component of a wind turbine. A turbine’s main shaft, for instance, represents one of wind power’s most important components, and one where high reliability is a necessity. Premature damage and failure are extremely costly, with disassembly and replacement of the main shaft bearing requiring the removal of the turbine’s blades, the rental of expensive and specialized equipment, and other operational headaches. One must also consider the lost power generation that comes with extensive downtime.

Grease in the main shaft bearing plays an important role in wind-turbine reliability, allowing for optimized bearing performance and longevity in a variety of challenging conditions. A critical contribution can be made by selecting the most appropriate lubricating grease for the right application. Temperature, humidity, and salt and water contamination in offshore applications all affect how greases will perform in a main shaft bearing application.

While not always in the forefront of one’s mind, the right grease can help prevent premature bearing damage and help optimize total uptime for turbines across a fleet. The ideal grease helps seal out environmental contaminants; prevents wear and micropitting from occurring; reduces friction during operation; provides rust and corrosion protection; and contributes to overall extended bearing life.

But not all greases are created equal. The Timken Company recently conducted a battery of tests on commercial wind greases to identify critical areas of performance. As a leading bearing supplier in the wind-power industry, Timken is frequently asked for recommendations for main bearing grease. This article lays out the company’s findings and critical attributes in an optimized lubricating grease for enhanced wind-turbine performance.

Inherent Challenges
Today’s powerful wind turbines operate at slow input speeds and at high, variable loads. Taken together, those operating conditions pose major challenges for the main shaft bearing and the lubricating grease that must protect it.

First, let’s break down some major contributors to bearing wear, the primary contributor to premature bearing failure:
• Slow operating speeds: One of the most important jobs of the lubricating grease is to provide sufficient separation between the bearing rollers and raceways, and for that to occur, the grease must form a desirable level of film thickness throughout operation. Film thickness formation, however, is challenged by slow speed operation. A lack of film thickness significantly compromises the grease’s ability to protect against wear and may lead to premature micropitting on the bearing surface.

• Vibration: High rates of vibration in wind turbines are another challenging condition; even if the blades on a turbine are visibly still or rotating very little, the application tends to still experience “micromovements” or fretting that affect the bearing raceway. This fretting is an additional contributor to wear and corrosion, but an optimized lubricating grease can help protect against these consequences.

• Variable and shock loads: Wind speed, direction, and turbulence are continuously changing, and wind turbines must contend with these irregularities during every moment of operation. The continual speeding up and slowing down of wind speeds and variability in wind loads can lead to quick increases in rotation. Conversely, turbine operators must sometimes stop operation and apply the brakes, leading to a sudden stoppage. All put stress on the bearing and the grease that lubricates it.

Add to these regular operating challenges the fact that wind turbines can be found in different climates around the world. Cold climates pose a specific challenge, as lower temperatures will lead to lubricant thickening. In Canada, for instance, a lubricant that pours like water from a faucet in regular temperatures can become as thick as molasses when the temperature goes below freezing. Greases must also account for other environmental factors that can interfere with the grease itself, particularly water ingress from humidity and precipitation. In offshore applications, salty air and water can lead to an inability to generate proper film thickness, and therefore to higher rates of wear and corrosion.

Finally, an optimized grease may be able to offer extended re-greasing intervals to help wind-farm operators minimize maintenance requirements. Currently, most turbines are manually re-greased every six months. In the future, longer periods between re-greasing might be possible with the appropriate grease. Even in applications where the turbines are using automatic lubricating systems — where a small amount of grease is automatically introduced at regular intervals to the bearing from a larger reservoir — extended performance is desirable and can help maximize the turbine’s uptime.

Testing for optimized performance
The individual properties of available lubricating greases vary significantly, and through technical engineering evaluation and testing, Timken set out to understand the impact of those properties on optimized main shaft bearing performance. The team tested 14 individual greases overall. The following key performance characteristics were identified and evaluated:

Timken deployed a variety of industry-standard testing methods, such as ASTM and DIN, to identify and evaluate these performance characteristics. These tests provide more information than what is provided on product data sheets.

• Film thickness testing: A PCS-EHD2 testing rig was used to further investigate the influence of thickener and additives used by lubricating grease suppliers on the film thickness formation. Typically, the base-oil viscosity of the grease is used to calculate the film thickness. Film thickness is one key parameter affecting the formation of micropitting, one of the most common damage modes observed in wind-turbine main bearings. The additives, like viscosity index improvers, may help increase film thickness formation at various speeds and temperatures during operation to help prolong bearing life. Other researchers reported that the thickener does provide boost to the film thickness. However, the boost is diminished under prolonged testing. Understanding the individual influence of base-oil viscosity, thickener, and additives on the overall operation of the main bearing grease helps to develop high-performance wind-turbine main bearing greases.

The PCS-EHD2 testing rig also helped Timken compare changes in film thickness for new and used (worked) greases. Standard testing evaluates brand-new grease performance, and Timken sought to better understand the change in performance for grease that has been in use for a longer period of time. To simulate the shearing that occurs over time in a used grease, the grease was worked per ASTM D1831 for 500,000 revolutions. The testing revealed that the grease film thickness was similar for the fresh and worked greases.

It is important to evaluate the grease performance regardless of the bearing type (tapered, spherical, or cylindrical bearing). Because micropitting is also influenced by sliding, it is important to evaluate the greases under a wide range of dynamic conditions. Sliding has a significant impact on the friction characteristics that will exist during operation, and the bearing design itself plays a significant role here. Traditionally, wind turbines have used spherical bearings for the main shaft. By design, spherical roller bearings inherently have sliding, referred to as Heathcote slip, on the roller-race contact. Whereas tapered roller bearing are designed with true-rolling motion and the sliding by design will be zero. Where sliding increases, so too does friction, necessitating a grease choice that can effectively mitigate the performance-compromising effects of increased friction.

When it came to speed and temperature testing, results generally followed expectation: Higher temperatures reduced friction/traction coefficients for the greases tested. This was generally dependent on the base-oil type (i.e. mineral, synthetic) used in the grease formulation; greases with synthetic base-oils had lower traction coefficients than greases with mineral or semi-synthetic base-oils.

In terms of performance, it is desirable for grease to remain on the bearing surfaces to ensure adequate film formation and surface separation throughout operation. Proper grease distribution permits longer re-greasing intervals and helps reduce wear through effective film formation and part separation. The greases put through the LEM test demonstrated different characteristics.

As seen in Figure 1, Greases A, B, and D (all higher viscosity greases) showed higher grease loss after testing, and a residual oil film remained on the rollers and raceway. Comparatively, Greases C and E (lower-viscosity greases) demonstrated more preferential performance, with minimal grease loss observed and plenty of grease and oil remaining on the rollers. It was also shown that worked (used) grease represented no significant change in grease migration behavior.

Finally, the LEM rig tested for torque and temperature. Greases A, C, and E demonstrated lower bearing temperature, while high bearing torques were observed for Greases B and D. Grease C demonstrated the most desirable overall performance here, with low grease loss and low temperature and torque.

Overall results and conclusions
Timken based its final conclusions and results on five key performance attributes: Film thickness, grease traction, bearing torque, operating temperature, and grease migration. The grease demonstrating the most balanced range of desirable performance across these areas was Grease A, formulated high-viscosity grease with a synthetic base-oil.

It is important to realize that certain grease characteristics could be more desirable in particular applications than others. For example, high-viscosity greases tend to become too thick in colder climates, leading to higher torque, higher temperature, lower migration, and may be difficult to pump from an automatic lubrication system. In this case, lower-viscosity grease with better migration may be more suited.

Therefore, the bottom line is this: Wind-turbine manufacturers and wind-farm operators need to be diligent in the selection of wind-turbine main bearing grease and should seek suppliers with knowledge and expertise in all areas of grease performance in a variety of applications. While some greases may demonstrate a broad range of desirable performance characteristics, optimized performance in the field varies depending on the application and the contending environmental factors.

Lubrication technology, however, is improving all the time, and a grease that provides ideal performance across all critical areas — in all climates — is possible. And as wind power ramps up across the globe, optimized performance and reliability depend on it. 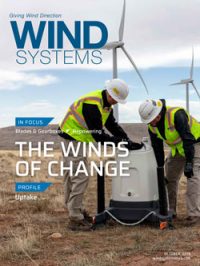 Extending the Lifetime of Wind Turbines