Maybe you’ve heard this one before: “A technician walks into a wind turbine and finds a broken bolt lying on the floor.” Not as humorous as one might think, actually, because this means something above has come apart or is about to fail. If this technician has worked on turbines for years, he might recognize where it came from. If not, now begins a process to determine its origin and why it isn’t where it belongs. In reality, most broken fasteners will not land far from their component and can be fairly easy to detect. Many bolt failures are simply the result of over- or under-tensioning, and continued failure at the same location should lead to questions about the practices involved in the original assembly and how subsequent tightness checks are conducted.

Flange bolting is typically assembled using a 30, 70, and 100 percent torque value progression. During the turbine’s first 500 hours, or A-service, manufacturers usually require that all bolting must be re-checked for proper tightness. As one of the most critical inspections during this maintenance, a 100 percent torque check of the turbine bolting is standard, from base to blade. In addition to the 500-hour service, annual and semi-annual checks often require at least a 10-percent re-check of tensioned bolts. Some turbine manufacturers might also require a 100 percent re-check on critical joints during the annual service inspection. How can it be, then, that fasteners continue to loosen and bolts continue to fail?

The answer might actually be in the torque check itself. Unfortunately, the results of this task are often misunderstood and can lead to adverse outcomes. Unlike the initial installation, there is no simple method to measure the tension of a bolt already in place other than to apply force and identify at which point it starts moving. When the bolt starts moving and the torque value drops sharply, this is considered the applied torque value and should be within tolerance of the initial setting. Manufacturers will state that if even one of the bolts in the 10 percent check fails to meet this minimum torque value, then all of the bolts of that flange must be checked. But what if the bolt doesn’t move at the specified maintenance torque value? Torque wrenches do not give a direct measurement of the tension force of the bolt, and their readings are affected by such things as dirt, surface finish, and lubrication. Corrosion in the form of friction can translate into falsely higher torque readings, which can create a condition where the bolt is not properly tightened and causes failures by allowing a joint to come loose.

When a bolt is tightened, it is stretched through the tensioning process and twisted slightly by the turning movement of the nut against the friction of the threads. It remains in this position as the joints apply pressure against the bolt, keeping it in strained tension. Applying more tension than is required will result in a value that exceeds the bolt’s yield point, causing it to shear. In theory, if technicians are asked to use a torque wrench to re-check the original torque value and look for movement of this bolted connection, they would need to apply enough torque to overcome the friction between the nut and its corresponding threaded surface. None of the torque applied by the technician is felt by the bolt until the nut moves, a point where the friction holding the threaded connection in that position is exceeded. Therefore, in performing a re-torque check the technician is actually measuring the amount of friction between the two threaded joints—if the nut moves at a lower torque value than the manufacturer’s requirement, it either wasn’t properly torqued to begin with or somehow the level of friction has changed. If it doesn’t move at all, it could be over-torqued.

There are many reasons why a bolt would be found loose on a subsequent torque check, or lay broken on the deck below. Perhaps it wasn’t tightened correctly on the initial assembly. Maybe the chamfer washer was installed upside down, allowing the required torque value to be reached when an actual lower design tension was applied, or the threads may have been over-lubricated and the torque applied was higher than the design for a dry lubricated connection. Relaxation from high temperatures and relaxation of the joint surfaces are also possible contributors. In the absence of the true contributing factor, however, manufacturers have no other options than to require a recheck of all bolts on flanges where a loose one was found.

Regardless of whether it’s a broken bolt found on the deck or a loosened nut discovered during a torque check, validating bolt tightness can help foresee these failures in bolted flanges. A smart maintenance practice should always be that if it’s loose or broken, replace it and make a sound determination of why you found it that way. 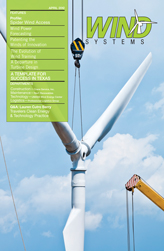