Even though an operating turbine’s gearbox might sound normal from the ground, it could be in quite different shape once the inspection covers are pulled and an oil sample is taken. Finding damage on high-speed gearing can be an indication that a softer-material, slower-moving component is fragmenting and sending metal particulates into the oil system.

We sometimes see gearing surface damage immediately upon pulling covers and then locate the actual source of the contaminant as being a planetary gear or bearing that has progressively failed. Spall, flaking, polishing, fractures, witness marks, and to some degree macro-pitting can all be observed with the naked eye. While these each have different initiators, the technician should be able to assess the severity of the damage and link it to other physical factors during an inspection.

Somewhere during the life of a turbine, there was likely an indicator of pending failure of a gearbox component. There are contributors that can be singled out if they were not performed correctly during the different stages of design, construction, and commissioning of the unit. An operator can hardly diagnose such factors as structural stiffness, bearing and gear materials selection, and asymmetric loading of the rotor within the design envelope. However, an operator can understand and observe the physical attributes of the operating wind turbine as they affect drivetrain loading; proper generator alignment and blade pitch index; blade exterior conditions; frequency of loose structural hardware; and the effect of fast shutdowns.

A good starting point is gearbox oil cleanliness. Although many gearbox failures resulting from manufacturing issues have been widely reported lately, damage to gear teeth caused by poor lubrication and maintenance practices is an ongoing problem. Improvements in gear materials and gearbox designs unfortunately cannot eliminate contamination. This contamination occurs in a number of ways: metal remnants from the manufacturing process; metal internally produced from gear and bearing wear; airborne particles through breathers and seals; and particulates that are unintentionally added during maintenance. Many manufacturers transport their units already filled with the initial oil, yet the first oil analysis may not happen until months later. The purpose of the initial oil sample is to establish a baseline from which to make a determination of the “trend” of the health of the gearbox over each six-month period. While focus on metals and ISO count is important, one of the most easily identifiable conditions related to contamination of oil is its Kinematic Viscosity at 40° C. This is tested as an indicator of how the oil is changing from its original grade — typically requiring a tolerance of 10 percent from the original specification. As viscosity changes with the amount of contaminants and wear metals, a trend on the Kinematic Viscosity will indicate a change over the sampling timeline while the Viscosity Index — the viscosity of the base oil — may actually remain unaffected.

Other routine maintenance activities that should flag a possible impact on gearbox life include: annual generator alignment checks, blade pitch calibration; and bolt torque checks. If any torque arm bolting or generator foundation bolts are found loose, there is a high probability that the alignment has been affected. A misaligned high-speed shaft could potentially contribute bending loads into the gearbox output shaft, causing high gear and bearing loading.

In operational terms, one of the most impactful events that a wind turbine gearbox experiences is the fast shutdown. For the turbine, this means that some fault condition exists where the unit must shut down immediately by applying the high speed brake and fast pitching the blades out of the wind. If the generator is turning at a high speed when this fault occurs, application of the mechanical brake against the inertia of the rotor may result in significant internal loads, potentially damaging the gearbox.

Many turbine manufacturers do an excellent job instrumenting their equipment and for that reason, even small errors should be investigated in earnest as they relate to the gearbox. Investigation should take place whenever errors are received for interstage bearing sensors, gearbox pumps, cooler fans, filter clogging sensor, gear oil inlet pressures, and gearbox oil levels. Predictive data can be extracted from SCADA through trending analysis of operating parameters and is unquestionably a good maintenance practice. In doing so, the operator should define the boundaries by which these trends are collected and distilled, presenting comparable conditions of power output and ambient conditions season to season.

Regardless of what initiated a particular failure at this point, we should look back on the maintenance and operational history to see what the data was telling us. Somewhere in the life of this turbine there was a red flag that appeared and for the sake of identifying and preventing a similar occurrence in others, this information can be valuable. We should expect that even though early detection cannot prevent failure, it can provide an opportunity to delay the failure or reduce incidental damage from a single component failure. It could be the difference between replacing a failed bearing and purchasing a new gearbox. 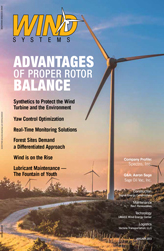