I was talking with a fellow passenger on a flight recently and brought up that I work in the wind industry. She asked me: “How do you get up there, to the top?” I told her that all the turbines have a ladder inside and that technicians ascend from within the tower in order to perform service. It was the standard answer I give, but recalling the conversation later, I realized the answer I gave was not the whole truth. I started thinking about all the access methods we now have now to get to the top of the tower. Inside the towers we have ladders, climb-assist ladders, and some man lifts. These are the common access methods used internally.

Not all the service work is on the inside of the turbine though. Some of the more adventurous maintenance work is performed on the outside. Most people in wind are familiar with the inside access, but fewer are experienced with using the access methods now used on the outside of turbines.

Crane work is a big part of wind energy. Using a crane for access is common with men working from baskets attached to the end of a crane boom or hanging from a crane cable in a basket. Using a crane for lifting men into position to perform repair work or to adjust lifting straps has always been part of the regular scope of work at the early wind farms. The cranes work well, but costs have risen as tower heights increase. These costs have wind farm operators looking for alternatives. The cost to move a crane to the job site to perform a simple repair is hard to justify. Fortunately there are two low cost alternatives to cranes that have been in use for quite a while now. These two alternatives are rope access and cable suspended basket access methods. Hiring companies experienced with these access methods is much less expensive than hiring a large crane.

The first time I had a need for rope access was when we had a problem with a blade and we didn’t want to call out a crane. The crane had a minimal call-out rate and the work that needed to be done was simple. The repair would only take five minutes to perform, but we needed a way to access the blade to repair it. The work was simple; the access wasn’t. In this instance, we bought a book on rappelling, bought the equipment, and taught ourselves how to rappel. We completed that repair and many others working off of those ropes. Today most all rope access technicians now go to a formal training program. One problem with working off of ropes is you have to be very fit. Unfortunately, I don’t think I am fit enough these days to work off of ropes.  Also, there are some in the industry who are not willing to work on ropes. I am sure there are many people in wind who are brave enough to perform rope work, but may not be physically able to do so.

For those not willing or able to work on ropes, there is another alternative. That alternative to the crane and to rope access is cable-suspended basket access. The suspended cable access is technology that was designed to help workers work on the outside of buildings and is commonly seen as the equipment that window washers may use. There are many different basket configurations that can be used from single man baskets to full wrap around baskets that can handle multiple people working off of them. The baskets allow for multiple techs to be at the work area with supplies and tools.  For those of us that are not willing or physically able to work on ropes, the cable suspended basket enables us to complete work without a crane for access.

One advantage a cable-suspended basket has over ropes is that others can go up in the basket to view the area of work. If the customer or supervisor is curious, he could go up to see what is going on. Rope access makes it difficult for others to inspect the area of concern.

Another advantage to cable-suspended basket is its ability to transport tools and materials up and down the tower all day long—a task that is possible, but arduous, for rope techs.

Some people may think that working off the ropes or the cable-suspended baskets is more dangerous than working off of a crane basket. I am not so sure that is true. I think that a crane has the potential to tip over at anytime—even if you are not in the basket. For rope or cable access, most people work with two ropes (or more if desired or necessary). When you tie off your ropes to their anchor points, and you have taken all the required safety precautions, the chances are you are not going to fall. Short of having both of your ropes or cables failing, falling would require the whole turbine to fall over. Cranes are very sensitive to the wind speeds and work is stopped at lower wind speeds than if you had set up to work off suspended platforms or ropes.

Rope access and suspended baskets have become a common part of the tools that we use to access wind turbines today. They are no longer the exception in wind. As the turbines get taller they will continue to help wind farm owners save money by displacing crane cost and allowing for a speedier and less expensive access method and overall maintenance cost. 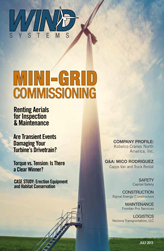