While it most certainly was not their intention, Rodgers and Hammerstein summed up Oklahoma’s potential for the wind industry in the title song to one of their hit musicals. “Oklahoma, where the wind comes sweepin’ down the plain” says it all. With the state’s long and storied history in traditional energy and the presence of this ample resource, Oklahoma continues to stride forward as it harnesses this asset to provide a reliable and renewable energy source.

For more than a decade, Oklahoma has seen steady growth in wind development and project installations. The state currently stands fourth in the nation in total installed capacity with 3,782 MW. Just how did a state steeped in rich traditional energy become a national leader in renewable energy development? The answer is simple – Oklahoma recognized the abundant resource that sweeps across its plains, looked to more than 100 years of experience in traditional energy, and adapted that knowledge for the wind industry.

MARKET DEVELOPMENT
Beginning in the late 1990s into the turn of the 2000s, wind developers recognized that Oklahoma’s wind resources were good, but early work was just taking place to find out exactly how good. The first wind projects in Oklahoma came online in the northwest and southwest regions of the state in cities like Woodward and Lawton, but were merely seen as means for the state’s utilities to test the waters on wind generated electricity and how they could manage the corresponding grid systems. To call these projects successes would be an understatement.

In the past decade, Oklahoma has seen steady growth in wind projects. Currently, the state’s installed capacity (3,782 MW) accounts for 16.9 percent of electricity generation. This year and the next are on track to be record installation years in Oklahoma with developers who took advantage of provisions as part of the federal level PTC. While the PTC expired at the end of 2014, the provisions still enabled projects to start construction into 2015. An additional benefit to Oklahoma developers is a state-level production tax credit, valued at $0.005/kwh of wind energy generated, which can be paired with available federal incentives to maximize the value of wind in Oklahoma. Early developments also had the potential of receiving a five-year ad valorem tax abatement to enable the wind projects that developed and operated in Oklahoma the ability to establish positive cash flows early in project operation.

In 2015, Oklahoma passed two pieces of legislation that will adjust tax incentives and credits available to the state’s wind industry. Industry stakeholders worked alongside legislators to ensure this legislation reflects Oklahoma’s momentum as it continues to be a leader among wind energy states. Stakeholders also took proactive steps to address concerns that had been raised by the public. By introducing more formalized guidelines for siting in relation to locations such as near schools, airports and hospitals, Oklahoma continues to blaze the trail for future success of this industry by addressing the vital aspect of public support for developments.

ULL FORCE
In any industry, success hinges greatly upon the ability to find the necessary talent pool. An energy pioneer, Oklahoma has a long history in educating and training workers to allow for an easy evolution and growth into the renewable energy industry, specifically, wind.

Oklahoma is home to numerous degree and certificate programs for entry into the wind energy field. The reliable and skills-tested workforce produced by these programs serves the technical, manufacturing and operations and maintenance aspects of the wind industry – and their graduates are highly sought after. Just last fall, an entire class of wind technicians from Canadian Valley Technology Center, just one of the many Oklahoma institutions offering training and certification in wind-related fields, received job offers in a single day.

WHAT THE FUTURE HOLDS
With the state having well surpassed its renewable energy goal of 15 percent renewable energy – Oklahoma attained 16.9 percent of the state’s energy from wind at the end of 2014 – Oklahoma finds itself in the unique situation as one of the pacesetter states in the growing industry. It begs the question: What is on the horizon for wind development in Oklahoma?

In answering this question, Oklahoma is approaching the wind industry no different that it has approached traditional energy for decades. The state has an abundance of a low cost energy resource and is able to provide that resource to its citizens and businesses, along with other states and regions. To date, Oklahoma already exports 24 percent of its wind generation capacity to utilities outside of the state’s borders. As wind capacity in the state increases, so will wind generation exports. Of the wind projects currently under construction set to come online by the end of 2016, nearly 35 percent of the power is contracted to out-of-state utilities.

The potential is seemingly endless. New markets, such as those interested in connecting with the Plains & Eastern Clean Line, will bring additional and unprecedented growth opportunities to Oklahoma. This transmission project will deliver more than 3,500 MW of wind power from the Oklahoma Panhandle region to utilities and customers in Tennessee, Arkansas, and other markets in the Mid-South and Southeast, making possible more than $7 billion of new renewable energy investments. It is just another example of how Oklahoma’s experience and history in the traditional energy sector lends itself to success in new energy sectors and has made Oklahoma a national and global leader in the energy resource revolution.

Oklahoma is home to a top ranked wind resource, an ability of our wind resources to reach markets outside the state boundaries, as well as have the ability to serve emerging markets with new transmission development and those businesses interested in having renewable energy serve their needs for locations within Oklahoma. These elements combined with a workforce that has the necessary skills and experience to serve the wind industry make Oklahoma a known and continued leader in the nation for wind energy development. 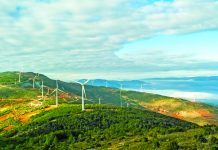 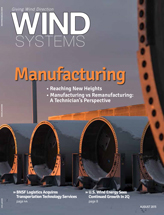