If there were anatomy lessons on wind turbines, it wouldn’t take long to fully understand that the gearbox is the structure’s most critical organ. It is essentially the beating heart of the wind turbine.  Failure of the gearbox won’t result in death but it could cost as much as $500,000 for emergency and reconstructive surgery. The gearbox is the part of the turbine that cannot be ignored, and thus requires attention to detail.

Historically, gearbox failures in the wind turbine industry are mostly mechanical in nature caused from undersized gearboxes. Failures that are most prominent are low-speed and high-speed bearing failures. Gearbox lubrication issues tend to be the other key reason leading to breakdown, typically coming from high-particle count and high-moisture content in the gearbox.

Most wind turbine owners either assume or were told by manufacturers that the majority of gearbox problems are caused by improper oil choice. In this case, one of two problems can occur – either the oil does not lubricate the gearbox sufficiently; or it holds moisture creating a “sludging” effect and therefore causes filters to plug. Ultimately, they both can lead to untimely shutdowns.

Another common cause of gearbox failure stems from improper oil changes. The industry has seen its share of inexperienced and unskilled service providers inventing oil change procedures that can lead to huge problems. Much of the problem comes from improperly mixing additives or non-procedural oil changes that cause oils to foam. When oil foams, it causes the gearbox oil sensors to detect low levels and shut down. Cutting corners in the oil change process – to save time and increase the number of turbines you can service in one day – can ultimately lead to unwanted downtime and expensive repair.

Two Types of Oil Changes
There are basically two types of oil changes. There is a “2-part” and a “4-part” oil change. A 2-part change involves two steps: drain out the old oil and add in the new. The 4-part change involves two additional steps: flushing and rinsing the gearbox. The 4-part process also includes flushing lines and changing filters. If using the same oil type, the 2-part change is sufficient. However, if the oil type is different and not compatible with the original oil, the 4-part change is required. A cleansing solution must be used to clear out all remnants of the used oil otherwise the foaming issues can arise causing the potential for considerable turbine downtime.

Currently, there are various systems used within the industry to change gearbox oil including some “custom-built” methods. There is the bucket method as well as another system that uses pressurized tanks involving a transfer of oil from either totes or drums. Both methods have proven to be inefficient and labor intensive. One significant disadvantage to the bucket system is that it doesn’t allow for the 4-part change. In recent years, the industry has seen other methods that have proved to be inefficient and ineffective. Figure 1

But methods that focus on safety and efficiency are most important for the future of the industry. Regardless of all other conditions, these two factors are the most critical of all. The other major focus area revolves around containment – eliminating the potential for oil spills. Anytime oil is handled or transferred, you are exposing yourself to a potential spill and environmental anxiety.

The latest technology that addresses all three of these primary concerns is the down-tower (executing the oil change from the ground rather that at the top of the tower) oil change service. The process is designed with safety, efficiency and containment in mind.  The down-tower method provides obvious safety benefits and greatly decreases chances of spillage.

By implementing the procedures designed by the oil manufacturers (manufacturers, of course, know the oil better than anyone), gearboxes operate at maximum efficiency. Keeping the turbines running at this high rate translates into higher overall productivity.

Because the process is efficient and less complicated, it means less downtime for wind farms.  It also means that conducting a service during the middle of the night or on a weekend is a very viable option.  Truly, it is a 24/7 service. This method also allows for oil changes to take place in extreme temperatures because oil from the trucks is heated for quicker fills in any weather conditions.

Oil must reach the gearbox in an efficient, but contained manner. From an environmental standpoint, it’s important that the oil be contained throughout the entire process. Since environmental matters are of such great concern, oil spills are not an option. The final step to the process is to ensure disposal is done properly.

Down-tower Procedures
Once the proper oil change “procedure” is in place, the level of difficulty decreases.  One of the most prominent features is the ability to heat the oil in the truck.  When ambient temperatures are warmer and the tower has been running, a 4-part change out can take less than a normal workday. With the tote system it has the capability of independently storing, containing, heating and maintaining a minimum of four 330-gallon totes. It can hold enough oil (virgin, rinse, flush and waste) to do multiple towers without returning to the O&M building to empty and restock. Figure 2

The down-tower procedure utilizing custom-built trucks offers numerous safety checkpoints to prevent spillage.  There is a safety and procedural “check list” to ensure all steps are followed.  Beyond offering 100 percent oil containment, the process has leak detection and overfill warnings; automatic shutoff; valve-to-pump interlocking/bypass to prevent over pressure of rated hoses; valve interlocking to eliminate cross contaminations of fluids; flow monitoring for both draining and filling of the gearbox; and an adjustable fill gallon count to prevent “overfill” of the gearbox.

From the truck, this technology includes a wireless touch screen control system – sent via a truck-produced Wi-Fi signal – that eliminates any type of improper procedures taking place up tower.  Depending on the filtration requirements of the customer (3, 5 or 10 microns), filters can be changed on the truck to accommodate the request. By using oil trays and pig mats, any residual spills can by contained.

Where other gearbox oil change methods each have their unique disadvantages, the down-tower system eliminates practically every one of these concerns. The track record on worker safety however (nearly 1000 oil changes with no injuries), is the biggest advantage to this method. Without having other day-to-day distractions on a wind farm like wind technicians do, the down-tower process offers comfort in speed and repetition.

The technological advances in gearbox oil changes have been a leading contributor to overall wind farm productivity. 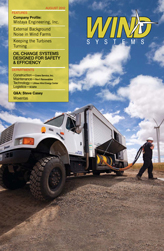