To create a viable worksite, crews had to build a cofferdam along the shoreline, then restore the area once the project was complete so it could once again serve as one of Block Island’s most popular recreational beaches. Working with a cable vessel and jet plow, crews were able to lay just one mile of submarine cable per day, and weather sometimes impeded that progress. Furthermore, the area had seen some World War II activity, so crews had to take extra precautions to avoid potential sites of torpedo tests.

On land, the grid-connection portion of the development required seven years of project management and permitting work. The interconnection had to clear 20 separate permitting processes from three levels of government and “almost every one of our permits needed some kind of modification throughout the project for something that had changed,” according to Mary Ellen Paravalos, director of strategy and performance for National Grid, who spoke at the Business Network for Offshore Wind’s International Offshore Partnering Forum on this subject.

A key lesson from the Deepwater Wind project, she said, was that grid connections require meticulous attention from the start of OSW developments because “sometimes the permitting and network upgrades can take as long as the turbine projects themselves.”

“The grid is the last thing that anyone wants to talk about in a project,” said Alastair Mills, business development and sales manager of Offshore Grid Access at Siemens. “They think we will go and get some turbines, have some contracts with people to build foundations, get some permits for some cables and then we’ll say, ‘build me a grid.’ It is really the worst place to put the grid people is at the end.”

Permitting times alone make that practice untenable. That practice can also preclude project teams from spending the time necessary to make smart design choices that can save money on a costly portion of the project.

For example, decisions about AC or DC transmission, voltage levels, and other specifics can greatly alter the size and price of OSW substations as well as the resources needed to install them.

“When you start talking about high-voltage, direct-current, then we are talking about things that are the height of the Statue of Liberty and the weight of the Eiffel Tower,” Mills said. “They are mammoth structures.”

One such project entailed 1.3 billion euros of converters and cables. The substations on Statoil’s Dudgeon project in 2014 weighed so much they had to be installed by heavy-lift vessels that were European-flagged and not Jones-Act compliant.

“Do you really want to design a grid system where you have to build a vessel or come up with a new, more risky installation method?” Mills said.

Choices about cable design can also greatly influence project costs. The submarine cables connecting the wind farm to shore are designed to transport high voltages while limiting the EMFs released with layers of insulation. Depending on the amount of electricity generated at the windfarm, the cabling costs for a project can vary.

Emerging technologies could offer new opportunities to optimize productivity and profits at offshore wind installations. Some U.S. developers, for example, are pursuing plans to install storage capacity at offshore sites.

“It is not that easy to do because you need an island or you need to build an artificial island,” Bernard said. “But it makes sense.”

Offshore wind farms can’t always deliver full production to the grid due to lack of capacity on lines, or they deliver power during periods of low demand and low prices.

Offshore energy storage, Bernard said, would resolve both issues “and reduce the cost of transmission.”

Since the 30 MW Block Island Wind Farm started generating electricity in December 2016, the U.S. offshore wind market has shifted dramatically with 3,960 MW scheduled to be built by 2025 from Virginia to Maine. With such a large amount of clean energy to be generated, there is an opportunity for states and the Federal government to integrate a holistic offshore transmission planned design that leverages opportunities to not only provide generation interconnection but simultaneously to upgrade the existing infrastructure.

For example, an offshore wind export cable could be grid interconnected with an old substation and circuit near the coast that is at the end of its operational life and in need of refurbishment. With careful planning, the facility could be rebuilt in conjunction with providing the interconnection, providing the ratepayer with a new, flood-resistant substation with higher-capacity circuits for a lower total cost than would be available if these transmission challenges were addressed independently.

Connecting offshore wind to the grid is complicated as illustrated from the Block Island experience. Reflecting on the lessons learned from Block Island Wind Farm and Europe, the U.S. has the opportunity to develop a marine grid with one main line on both coasts.

“We compare the backbone approach to the spaghetti approach,” said Pierre Bernard, CEO and chairman of the board of Friends of the SuperGrid. “If you can hook up different offshore wind developments to one, single cable (a backbone), you will significantly reduce the cost of offshore wind … In the spaghetti approach, every wind farm hooks itself to the grid … It is not only expensive for the wind farm, but it is expensive at the end of the day for the consumer.”

An offshore wind transmission design would:

An offshore transmission plan would evaluate the need to connect individual offshore wind projects at low cost, while also considering the long-term interest of ratepayers and grid reliability.

Today, U.S. submarine cable production is limited. Standardizing cable voltages, transformers, and other equipment would increase product volumes and begin to create the level of demand that will justify U.S. production and the corresponding employment opportunities.

Offshore transmission planning also would improve transmission systems, operations, and maintenance. Within the European market, the lesson has been learned that submarine cable failures do occur, and because they can take a long time to repair, they cause significant wind-farm down-time (i.e., loss of energy production) and financial loss. As has been seen in the German, Danish, Belgian, and U.K. markets, comprehensive transmission planning results in more reliable, lower cost submarine cable systems that are installed right the first time and receive appropriate preventative maintenance.

As a variable resource, wind energy has typically been credited with low-capacity value. Holistic transmission planning would recognize the differences between offshore wind-energy production profiles and other variable clean energy resources such as terrestrial wind and solar. When coupled together and matched with demand response and/or storage, these resources do have the ability to provide reliable capacity. When ratepayers get more capacity value out of variable renewable energy resources, they require less capacity from traditional fossil resources and save money. Planning from multiple perspectives and with a view to achieving multiple objectives will result in the best outcome. A piecemeal transmission approach cannot achieve these goals.

The long-term success of offshore wind in the United States requires the industry to demonstrate steadily declining costs for the clean, reliable energy that consumers need. Planning and building the transmission interconnections for the state’s new offshore wind farms can contribute to the needed cost reduction, can deliver high quality jobs throughout the system life, and cannot be an afterthought. There are many opportunities to reduce costs, create jobs, improve reliability, and deliver greater value for consumers when transmission is done right.

The Business Network for Offshore Wind’s 2018 International Offshore Wind Partnering Forum, April 3-6, in Princeton, New Jersey, will gather both industry and regulators. A Smart Approach to Offshore Transmission Networks, will be explored as an idea worth sharing and implementing. With 3,940 MW of offshore wind needing to be grid connected by 2025 and many more to come thereafter, now is the time to prepare and plan — there are no excuses for future inefficiency. 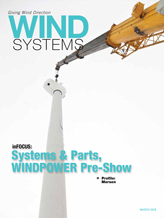