Take more than 150 years of history, throw in a wide demographic reach spanning 10 countries on five continents, add a medium-sized family-owned company, and what do you get?

It’s hard to believe a company like that exists today—where they’re able to combine big-company assets with the customer service appeal of a family business—but there is one that encompasses all of these characteristics.

Eickhoff Corporation is that company, and it has established a name for itself among its top competitors.

“Eickhoff Group is still considered a small company,” said Steve Koscelnik, Eickhoff sales manager of gearbox services for North America. “Although competing companies have a wide breadth of product avenues to pursue, and despite their budgetary allowances to enter markets, Eickhoff is extremely innovative and very competitive within the wind market.”

Eickhoff’s history began in 1864 when Johann Heinrich Carl Eickhoff founded the company as a small foundry in Bochum, Germany. It was built to supply the mining industry with wheels for mining trolleys.

However, in 1990—a long way from its roots in the mining industry—Eickhoff, like many industries at the time, set its eyes on the skies and started to manufacture gearboxes specifically engineered for wind turbines.

Almost 20 years later, early in 2009, Eickhoff began producing a large series of gear components while also assembling gearboxes for wind turbine gearboxes at the Eickhoff Wind Power GmbH facility, which, at the time, was a new, modern machining plant near Dresden, Germany.

Today, the German parent company has subsidiaries all over the world, stretching from South Africa and Australia to Pittsburgh, Pennsylvania, where Koscelnik’s facility is located.

“We are one of the many service centers for Eickhoff Group, and we, Eickhoff Corporation, represent them here in the United States,” Koscelnik said. “We handle the services, repairs, and field work for the Americas.”

Since they are operating out of a 35,000-square-foot facility at the Pittsburgh location with seven technicians in the field and at the facility along with eight administrative staff members, Koscelnik said they don’t have much room for keeping projects in house, but that’s not slowing them down.

“Our services and projects completed in the facility quickly have to either move to our storage location or go directly to our customers,” Koscelnik said.

According to Koscelnik, Eickhoff Corporation primarily serves the wind power industry in Canada and the U.S. with very little of its operations reaching South America. Full engineering support is provided by Eickhoff in Bochum, Germany, which has been supplying wind turbine gearboxes to this industry for approximately 20 years.

“We perform full gearbox repairs and rebuilds at our Pittsburgh facilities, encompassing the inspection of the damaged gearbox, issuing of new and repairable parts, and commissioning a fully reassembled and load-tested gearbox within the parameters of our customer’s orders,” Koscelnik said. “Our staff also splits their time between our facility and the services they provide in the field. From exchanging shafts and bearings to performing visual and vibration inspections, Eickhoff technicians are well-versed in performing the tasks needed to solve gearbox issues uptower.”

According to Korcelnik, once a gearbox reaches the Pittsburgh facility, it will be completely disassembled. All of the components and gear stages of the gearbox will be inspected and measurements will be taken. From there, the gearbox will be completely cleaned, refurbished, and reassembled. Once the reassembled gearbox has passed a series of tests—including a no-load, full-speed on-site function test with full load testing up to 3 MW available at a contractor’s test stand—the unit is ready to be returned to the customers. This repair process has been approved by GE.

While the Eickhoff Corporation has the capabilities and reach of a larger company, it also provides the customer service many companies seek out in the wind power industry.

“Eickhoff’s quality is second to none,” Koscelnik said. “The size of our company allows for more flexible in answering and responding to customer inquiries in a more timely manner, whether it’s their need to having a gearbox inspected in the field, or a more lengthy process of finding a root-cause analysis of a gearbox failure. I think that because we don’t have as many departments or doors for a project to go through, our response time and flexibility is what a customer is looking for, especially in an industry of rapid change and technological advances that are happening on a daily basis.

“If a customer has a need, we always try to respond quickly so their daily operations don’t suffer. As a service hub for Eickhoff gearboxes, we will do everything in our power to relieve them of their issues and concerns."

Koscelnik also said that while Eickhoff may not be the first name to come to people’s minds when looking for wind turbine gearbox repair or reconstruction, it should be.

“We offer as much as any of our competitors,” Koscelnik said. “We can perform any uptower, gearbox inspection—whether it’s with a visual boroscope inspection or vibration monitoring. Eickhoff has experienced technicians can not only perform the inspections, but they also have the knowledge needed to focus on a gearbox concern and evaluate what is occurring within a customer’s product.”

“From that point, we can change out and work on a number of the areas of a gearbox, including the high-speed shaft, bearings, intermediate-stage gears, cable tube exchanges, etc.. Also, replacements of external parts can be done by either the site or us. That includes oil coolers, oil pumps, external motors and drive.”

According to Koscelnik, Eickhoff Corporation is looking for new and improved ways to keep gearboxes in the sky while completing repairs and installations.

“With our primary customers, we’re trying to improve product life and perform as much uptower work as possible,” Koscelnik said. “We’re trying to come out with new technologies and capacities of performing more repairs uptower. We’re trying to alleviate the need to bring gearboxes down-tower.  Coming up with such solutions—that is definitely one of Eickhoff’s focuses right now.” 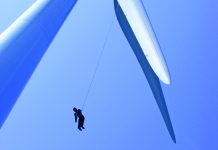 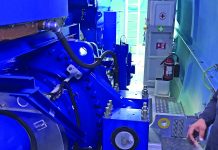 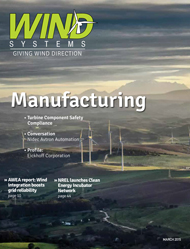