Wind farm owners spend a great deal of time figuring out how to produce more power, make more money, lower their expenses, and achieve the most part gain out of their spinning assets. For a wind turbine to generate power, and thus more money, either the wind has to blow more or you have to get paid more for your power. We don’t have control of how much wind is blowing within the swept area of the turbines, and we usually don’t have control over the rate of pay that we are compensated for when we supply power. The best option is to make the turbines as available as possible (as safely as possible). In doing so, there may be a way to improve your revenue.

There is a maintenance task that is for the most part ignored, but it can affect the turbines’ energy production — blade washing. Those who know me understand that I don’t waste my time or limited budgets on performing unnecessary services to keep our turbines running. Some may believe that turbines with dirty blades that have variable pitch and variable speed don’t need washing. However, I have not found this to be true. I have found that blade washing can improve your turbines’ production output during certain times of the year. In fact, you may find that your power output will benefit from a blade-washing program.

Blade washing has been one of the wind turbine services that Frontier Pro Services has provided over the last 30 years. Thousands of wind turbine blades have been getting washed in California since the 1980s. Each spring, during the hatching season for winged insects, we begin our blade-washing program, and we continue it throughout the summer as the blades get dirty from bug build-up and the turbines’ energy production declines. We have found that the build-up of smashed insects creates enough of a change to the blade airfoil and a drag on the blade that the turbines’ production outputs drop. My yearly indicator to know when it’s time to start our blade-washing program is when bugs start to build up on my truck windshield. If I need to clean the windshield of my truck, then it is time to start washing blades.

The way the blades are washed in California has been an evolving process. Sometime in the early 1980s, tower operators installed permanent blade washing pipes up the sides of the wind turbines near the top of the tower. The blade pipes have open ports along the pipe behind the rotor. While the turbine is running and the blades are passing by the pipes, water is pumped up-tower by a water truck that is connected to the bottom of the pipe. The water jets out of the ports along the pipe and sprays out into the path of the rotating blades. After a few minutes of the blades passing through the spray water, the blades are mostly clean of bugs, and the airfoil performs more efficiently.

Another method of blade cleaning is using a water truck or insulator cleaner truck with a similar spray bar attached to it. The boom with the spray bar is placed in front of the rotating rotor, and the water is sprayed out into the rotating rotor. Once again, the turbine production is back on track after a few minutes. This method is still used today, and it is completed as often as every two weeks during production months. There is even an automated smart spray bar system that uses the timing of the blades to spray the water as each blade passes the tower, thus conserving the amount of water used. There are a few other methods used for cleaning wind turbine blades, including a sponge-type apparatus attached to a boom truck. When the turbine is turned off, the sponge rubs the bugs off. This method cleans better, and the time between cleanings can be doubled to once a month. This has been done on turbines as large as 1 MW on 60-meter towers. Once again, with the blades cleaned, the turbines’ production returns to its design’s output. Sometimes, waxes or other coatings can be applied to make the bugs unable to land on or adhere to the blade’s surface. Blades can be cleaned by rope-access teams, men in crane baskets, and virtually any way you can imagine.

Figure 1 and Figure 2 show data from older turbines with variable pitch that are greater that 500 kW, but less than 1,000 kW. Image 1 and Image 2 are of two blades, and Figure 1 and Figure 2 are of the two power curves that they each produced — the clean blade with the normal power curve, and the dirty blade with the poor-performance power curve. Owners and managers of a wind power plant know that most of the energy production is produced during winds with less-than rated power. Turbines produce power for thousands of hours at less-than maximum output. If your blades are not clean, then you are losing production. 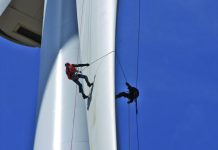 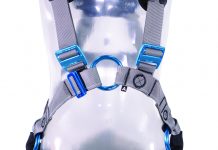