The successful development of wind power projects requires reliable projections of the productivity and longevity of the assets being installed. The wind itself is a complex, variable, and intermittent resource, however, which introduces a high degree of uncertainty into any prediction. Recently, cutting edge techniques based on laser technology have been pioneered which tackle key contributions to this uncertainty.

Knowing the Unknowns
Project uncertainty can be broadly described using two categories. Typically, wind data are acquired from instruments on a met mast at a location somewhere on the project site and the conditions at other proposed wind turbine locations are approximated from these data using wind flow models which represent the influence of the terrain, obstacles, and other wind turbines on the flow. The uncertainty introduced by these approximations is an example of what might be termed “space-domain” uncertainty, which arises because our data obtained via measurements do not directly represent the full spatial extent of the wind power project, just the mast location. Another example of space-domain uncertainty is the extrapolation of measurements to heights above the top of the mast.

“Time-domain” uncertainty occurs because our datasets do not directly represent the full life cycle of the project, but rather a short term measurement campaign of one or two years during which data have been acquired. This uncertainty can be reduced by comparing the short term data from the project site with data obtained over the same period at another reference site for which longer term data are available. The relationship between the sites established using the short term data is then applied to the long term data to form the basis of predictions of the resource available for exploitation over the life of the project.

Progress in reducing time-domain uncertainty is slow and piecemeal, relying on the adoption of ever more sophisticated statistical and mathematical techniques to tease from the short term data information that can be applied to long term projections. However, dramatic reductions in space-domain uncertainty are now available as a result of LiDAR technology which enables significant improvement in our understanding of flow across the site in the space-domain. This is important since the level of uncertainty pertaining to a project determines the level of annual energy production that can be taken to be sufficiently reliable to service the debts raised to finance the project.

Rise of the Virtual Mast
For a few years now the limitation of masts, in terms of being restricted to a single location rather than acquiring data from multiple locations across the project site, has been mitigated to some extent by the adoption of first-generation remote sensing solutions. These have been seen as “virtual masts”—robust, compact, portable solutions that can be simply and easily deployed to locations of interest to acquire mast-like data using sonic or laser probes. In this way they remotely measure the wind at height, for example, to distinguish which of two differing model predictions most accurately represents reality. As a result the contribution to project uncertainty from the influence of the terrain can be reduced. More recently LiDARs, which use laser technology, have been seen as offering a greater degree of flexibility and accuracy than SoDARs, while at the same time SoDARs, which use sound pulses, do not represent the same expense.

Second-Generation LiDAR
The laser beams used by LiDARs interact with the wind in such a way that a single beam does not provide a measurement of the wind speed; rather, the data from multiple beam orientations must be processed in combination to derive a wind velocity vector. If a single device is used to achieve these beam orientations by scanning the beam, then the beams necessarily diverge from the device and define a volume in space. One important consequence of this is that if the flow is not uniform, for example, as a result of the influence of complex terrain, the wind velocity will vary within this volume, exposing each individual beam to different velocities such that a single unambiguous wind velocity cannot be derived from the resulting measurements.

The Arc Scan
An example of a second-generation scan geometry is the arc scan. This involves varying the direction of the beam through a range of bearings, or azimuths, while maintaining a constant low elevation angle, close to horizontal, to measure the wind some distance from the device. Figure 1 shows an example of this. Laser beams are shown emitted from the device location to scan through a reference mast located 500 meters away. The wind speed time series measured over a two-week period by the mast and the second-generation LiDAR are compared in Figure 2, where the mast data is shown in blue and the LiDAR in green. Excellent agreement is observed. Indeed the arc scan measurements easily satisfy all published acceptance criteria for the performance of first-generation devices installed immediately adjacent to the mast, except in this instance the measurement has been made from a distance of 500 meters away using second-generation techniques.

From Pixel to Picture
Comparison studies to determine the extent to which remote sensing devices replicate the capabilities of mast mounted anemometry will always be necessary as long as only mast mounted instruments can be assessed under controlled conditions in wind tunnels which have been inspected and certified as compliant with national standards, since this establishes the traceability of the accuracy of field measurements. Nevertheless, a mast only provides a single pixel of the more complete picture that represents flow across the entire project site. Second-generation instruments deliver this complete picture. Figure 3 shows a plan view of wind turbine wakes directly measured using a second-generation LiDAR that has scanned its beam across the site over the course of about one minute. Here we see the accuracy demonstrated above for an individual pixel by the arc scan extended to the visualisation of flow across an entire site.

Productivity and Longevity
The complex nature of the wind has significant consequences beyond the predictability of power production. Some resources are relatively benign: the loads imposed on a hydro plant in the routinely inspected and maintained confines of a turbine hall are constant and predictable. In comparison, the loads the wind imposes on wind turbines, of which there are many more situated in locations that present access challenges, are much more severe. In comparison to other resources, the wind is constantly trying to break our machines. The urgency with which we must increase the sophistication of our assessments of the loads imposed by the wind on wind turbines is only rendered more intense by the creeping inadequacy of the models and methods we currently use which, while useful hitherto, are gross oversimplifications in relation to the conditions prevailing across the rotors of the larger machines now being developed and installed. The kind of detailed, precise, and accurate representation of flow across an entire site illustrated by Figure 3 contains critical information that is indispensable for the assessment of site suitability.

Whereas Figure 3 illustrates a plan view of wind flow, a vertical cross-section can also provide useful insights. Figure 4 shows a wind shear anomaly known as a low level jet surveyed using this technique. The color scale shows the wind speed. High wind speeds are observed at one height while lower wind speeds are seen above and below it. The variation of wind speed with height can impose serious loads on a wind turbine. In this instance the low level jet was observed in a location in mid-plains U.S., where its diurnal evolution during the summer months results in a short period of 10 minute to half an hour during which turbine killing loads are imposed across the rotor. The low level jet rises and becomes more intense during the course of the morning and imposes its most extreme wind shear loads on the rotor and drive train as it passes the top tip of the rotor. The comprehensive investigation of this phenomenon has only been made possible by the advent of second-generation LiDAR.

Complex Terrain Issues
The silver bullet that dispenses with the issues that plague first-generation devices in complex terrain is the implementation of a convergent scan geometry. Rather than use beam orientations that diverge from a single device to define a volume within which flow inhomogeneity can be manifested, we can use multiple second-generation devices to direct our beam orientations to converge at a point. This is illustrated in Figure 5, where data are presented comparing measurements made using three LiDARS implementing a convergent scan geometry with a reference mast. At heights where more than one reference instrument is installed on the mast it is seen that the LiDAR measurement lies between the reference measurements; that is, the LiDAR agrees with the reference instruments better than the reference instruments agree with each other.

Looking Forward
The need to deliver the greatest reduction in project uncertainty for a given investment in data acquisition will continue to entail the operation of different kinds of instrument used in the manner that most effectively exploits their respective complementary strengths. The main cost of a mast is incurred during installation, and so these are most useful for acquiring a year or more of data. In addition they are well understood and so are good reference instruments to which other devices can be compared on site to verify their performance. SoDARs are relatively inexpensive and have low power consumption, and so they have an important role to play in any measurement campaign.

In many instances when the cost-benefit of using a LiDAR in a virtual mast role to acquire a single pixel of data is analyzed, it is found that better value can be achieved using a real mast. Achieving optimal cost-benefit of LiDAR requires that it is used to do things that are difficult or impossible to achieve otherwise. In general the possibility of acquiring the complete picture as opposed to an individual pixel indicates we must ultimately dispense with the mast analogy to unlock the value of LiDAR. Only then can we realize the ambition to eliminate project uncertainty that arises due to our incomplete understanding of flow across the site, leaving only uncertainty due to the intrinsic variability of wind over time. 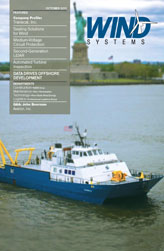 A New Direction for Turbine Gearing