“Interior is proud to be a partner in this historic milestone for offshore renewable energy,” Jewell said. “Deepwater Wind and Rhode Island officials have demonstrated what can be accomplished through a forward-looking vision and good working partnerships. Block Island Wind Farm will not only tap into the enormous power of the Atlantic’s coastal winds to provide reliable, affordable, and clean energy to Rhode Islanders, but will also serve as a beacon for America’s sustainable energy future.”

“As the Nation’s pioneering offshore commercial wind farm, the lessons learned from the Block Island project about facility design, fabrication, and installation will inform future projects to be developed on the Outer Continental Shelf,” Hopper said. “This is an exciting development for Block Island and also demonstrates the way forward for wind energy in federal waters off America’s coasts.”

Also participating in the celebration were Rhode Island’s U.S. Senators Jack Reed and Sheldon Whitehouse and U.S. Representatives Jim Langevin and David Cicilline; Deepwater Wind’s CEO Jeffrey Grybowski; members of the state General Assembly; representatives of the U.S. Army Corps of Engineers; and members of the environmental community. The celebration included a boat tour of the project site to provide a close look at the turbine foundation work underway.

Deepwater Wind is constructing a five-turbine, 30-MW wind farm in state waters about 3 nautical miles southeast of Block Island. At 589 feet above sea level, the turbines will be among the tallest in the world. The project, scheduled to be online in 2016, is expected to power about 17,000 homes. The facility will provide electricity directly from the wind farm to Block Island. Because the island uses only 1 MW of power in the off-season and 4 MW in the summer peak season, the remaining 90 percent of the energy produced during the off-season will be sent to other state customers via a 25-mile bi-directional submerged transmission cable between Block Island and the Rhode Island mainland.

Eight miles of the transmission line cross federal waters. After determining that there was no overlapping competitive interest in the proposed right-of-way area on the Outer Continental Shelf and conducting an environmental review, BOEM issued a right-of-way grant to Deepwater Wind Block Island Transmission System, LLC, in 2014.

The wind farm will produce more than 100 million kWh of clean energy annually, and Deepwater Wind will sell the electricity through a Power Purchase Agreement to National Grid, a Rhode Island utility. Project developers estimate the wind farm will reduce electric costs by 40 percent for the average ratepayer on Block Island, which currently relies on expensive diesel-powered generators. With the transmission line, Block Island has no need for backup diesel generators, as it can purchase electricity from National Grid once the cable is laid.

Because the project will be sited in state waters, the U.S. Army Corps of Engineers was the lead federal agency for analyzing the potential environmental effects of the project under the National Environmental Policy Act (NEPA). In addition to issuing the right-of-way grant, BOEM was a cooperating agency in the NEPA analysis and associated consultations led by the Corps.

Spurring responsible development of offshore wind energy is part of a series of Obama administration actions to increase renewable energy both offshore and onshore by improving coor dination with state, local, and federal partners. Since 2009, the DOI has approved 56 wind, solar, and geothermal utility-scale projects on public or tribal lands, including associated transmission corridors and infrastructure to connect to established power grids. When built, these projects could provide about 14,600 MW — enough energy to power nearly 4.9 million homes and support more than 24,000 construction and operations jobs.

The success of the Block Island project was enabled by the strong support of state and local leaders who developed early policies for the planning and proper siting of the wind farm as part of the state’s overall renewables goals and marine spatial planning efforts. Beginning with Governor Donald Carcieri and continuing with Governor Lincoln Chafee, and now-Governor Gina M. Raimondo, Rhode Island’s top officials have all supported offshore wind and the development of the Block Island Wind Farm. Rhode Island’s Congressional delegation also supported federal tax and permitting policies important for this project and industry. Deepwater Wind worked closely with federal and state agencies and local environmental groups in developing a groundbreaking set of construction rules to minimize any impacts on marine mammals.

Maps and additional information on this project are available on DOI’s website. 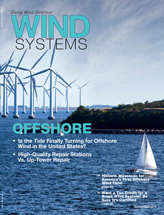 The Critical Nature of Cable Design