Wind power is on the verge of turning Wyoming into a major player in the field of renewable energy.

Share on Facebook
Tweet on Twitter
PDF
Wyoming has some of the best wind in the country, but the Cowboy State’s contribution to renewable energy has been sporadic at best, ranking it 16th in the nation of wind energy production, according to a recent study by the University of Wyoming.

That study’s ranking translates to roughly less than 1,500 MW of wind energy currently produced in the state.

All that could change when several planned large-scale wind-energy projects go online within the next two to eight years. Those projects would total 7,500 MW of new capacity. That could bring Wyoming up to the No. 2 spot in wind production based on current capacity levels, according to Wyoming officials.

One in particular, the Chokecherry and Sierra Madre Wind Energy Project will be a 1,000-turbine wind farm south of Rawlins in Carbon County. With approximately 3,000 MW of capacity, it is expected to be one of the largest wind-energy projects in the world.

“Construction for the project started in September 2016 (permitting began in 2007-2008),” said Kara Choquette, director of communications with the Power Company of Wyoming. “We anticipate Phase One to be complete in 2021 with the first 500 turbines. Phase Two with up to 500 turbines should be complete by 2023.”

Some of the challenges that have faced wind energy in Wyoming include the state’s small market for power, according to Cindy Wallace, executive director of Carbon County Economic Development Corporation.

“Wyoming is farther from the largest markets on the western grid than other western states,” she said.” Our transmission capacity that went out of state was limited, so that’s the reason why some of our wind growth quit because of the lack of transmission lines to deliver power out.”

Another unique scenario for Wyoming is dealing with the land itself.

“Some people don’t understand that in some states you can just go to farmland and ask the farmer, ‘Can I lease your land?’” Wallace said. “In Wyoming, not quite half of our land is federal. So there’s quite a bit of land, in other words, where every other section is all federal land.”

Permits are required by the Bureau of Land Management and the Federal Government, which adds quite a bit of time and effort to do these projects, according to Wallace.

“That’s part of the reason that the Power Company in Wyoming’s Chokecherry and Sierra Madre has taken so long, because they have had to go through all the permitting and necessary requirements required by the BLM and the Federal Government,” she said.

The Chokecherry and Sierra Madre Wind Farm is being built on land owned by the Overland Trail Cattle Company. The ranch spreads out over 320,000 acres, but the massive wind project will only cover 5/10ths of a percent of the ranch, or 2,000 acres, according to Wallace.

“So, they’ll still be able to continue their cattle ranching and operations on there,” she said.

Another challenge springs from the fact that, for decades, Wyoming has been synonymous with coal and fossil fuel production, but officials say they believe there is room for all forms of energy production, old and new.

“There’s always the belief that, if renewable wind energy is succeeding, then that means that other traditional energy sectors are going to be facing a harder future,” said Nathan Wendt, vice president of initiatives with the Jackson Hole Center for Global Affairs. “We don’t believe that’s true. We believe that it can be an all-of-the-above pathway for the state to take. Because Wyoming is an energy-producing state, a lot of people make their livelihood by producing energy. Sometimes there’s a perception that if wind is succeeding, then that means that traditional fossil fuel sources of energy are failing. We think that’s a false choice, and that this is an additional opportunity that will be useful to the state and be helpful in driving economic diversification.”

Part of that breaking with tradition is evident in the logo designed for Rawlins’ 150th anniversary, according to Choquette.

A locomotive from the Union Pacific Railroad illustrating the past shares the picture with a quintet of wind turbines, signifying Rawlins’ future. It also shows how Wyoming is set to embrace renewable energy on a scale larger than it ever has before.

But before the turbines for the big projects can start going up, first transmission lines and actual roads need to be constructed, Wallace said.

For the Chokecherry and Sierra Madre project, that includes the TransWest Express, a DC transmission line more than 650 miles long that will deliver power to the Southwest. Other wind projects also are developing transmission networks to accommodate the expected power generation, including Rocky Mountain Power’s Gateway West Transmission line project.

Thousands of miles of roads are under construction now using gravel from a nearby quarry, according to Wallace. But once construction begins, it will be the beginning of a job boom thanks to the project.

“At the peak of construction, which would be the months of April through October, there will be 975 construction workers,” she said.

Once completed, the Chokecherry and Sierra Madre project would create 116 permanent, high-paying jobs, according to Wallace. The transmission line projects would bring even more jobs, and that doesn’t include ancillary jobs that will be created by these massive wind projects.

“There’s a lot of promise in those projects, and they will generate a lot of jobs and generate a lot of tax revenue,” Wendt said. “And also, we believe that it would really open up some of these additional opportunities like attracting wind manufacturers to the state and tapping into the corporate demand for renewable energy. That’s really where we see the future and the vision that we’re working to promote.”

That job potential is already showing up years before Wyoming’s massive wind projects go online. The Wyoming Wind Coalition, which is a part of the Jackson Hole Center of Global Affairs, recently worked with Goldwind Americas to roll out free training to anyone who wanted to become a wind technician, a position that is one of the fastest growing occupations in the U.S., according to Wendt.

“I think there’s definitely interest in the job potential that wind can bring to the state and the extent that the wind industry can contribute to that,” he said.

Operations and maintenance of the wind farms during their 20-year lifespan has the potential to create $3.6 billion in new economic activity, according to the university study, which also estimates another $2.6 billion would be created by direct plant expenditures and yet another $1 billion in additional indirect and induced economic activity.

In addition to the Chokecherry and Sierra Madre project, several other projects — both large and small —  are scheduled to be built within the next two years, according to Wallace.

Four projects from Rocky Mountain Power are expected to generate more than 1,300 MW of power, and the Ekola Flats Wind Energy project plans another 250 MW with up to 100 turbines. The TB Flats Wind Energy Project is another wind farm in the works that will deliver up to 500 MW of energy.

And making it off the drawing board is a project from Viridis Eolia that would see a nine-phase 1,870 MW facility built in Shirley Basin.

“When you combine all these projects, we’re going to be generating a lot of energy out here,” Wallace said.

These projects have put pressure on state legislators to find new sources of revenue to replace lost energy revenue from oil, natural gas, and coal, which account for up to 80 percent of the state’s operating budget needs, according to the university study. As of now, how to take advantage of potential revenue without have a negative effect on planned and potential wind projects is still being debated, the study said.

Wyoming is set to be a major player in the wind industry over the next decade with billions in new revenue and thousands of work hours at play. It’s just a matter of time.

“The real story in Wyoming is what could be,” Wendt said. “Because there are huge wind projects that are planned, that if they came online, would catapult Wyoming into being the top wind producer in the nation.” 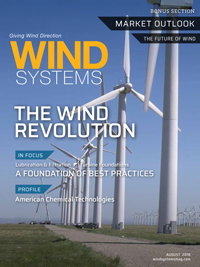