The siting of a wind farm project can be a lengthy, costly, and a complicated process once a developer takes into account the different requirements. Not only is it critical to identify a site on its resource viability, environmental impact assessments, transmission, and interconnection availability are just a couple of the required processes that must also be conducted or evaluated. Although the aviation impact assessment process has always been required, it is only recently that the industry as a whole has become aware of the complexity and magnitude of this process. A U.S. Department of Defense report was issued in 2006 documenting the impact of wind turbines on military missions, and awareness has increased since that time. Today many proposed projects are either on hold, deferred, or cancelled. Solely in 2009 there were nearly 9,000 megawatts that fell in either one of those categories; this is comparable to the number of installed MWs at 9,900+.

The problem the industry faces is that wind turbines can impact a radar’s ability to perform its mission, independent of the type. It has been shown that wind projects can affect military radars, commercial aviation radars, weather radars, and border surveillance radar, just to name a few. Wind turbines are large obstructions with significant degrees of freedom. The combination of a large moving rotor, tracking of the wind (yawing), and the size of the machines create both a dynamic clutter and Doppler effect, which affects radars differently. The clutter of the machine is basically due to the return of the radar signal through reflectivity, and it is proportional to the radar cross-section (RCS) of the machine. Although the base of the tower is stationary, the nominal area of the turbine to the radar is dynamic since the machine is constantly tracking the wind. Wind turbines are made of highly reflective materials—steel, fiberglass, and carbon fiber composite—and can scatter and return a significant amount of the energy. The turbine tower is the most reflective component, but since it is constantly stationary the rotor is the largest problem to the radar. In most cases the signature can be quite large and can affect the radars/operator’s ability to differentiate the wind farm from flying aircraft and weather storms. The Doppler effect is due to the moving rotor and can affect the moving target indicator of a radar.

Researchers at the national laboratories, in academia, and in industry have been investigating various ways to mitigate this challenge, with mitigation options divided between those for radar and others for the turbine. When assessing options for the radar one must keep in mind that, independent of mission, many of the radars across the country are over 30 years old, and the ability to modify them is significantly lower than that of a new unit. Additionally, radar replacement is feasible, but economics are the challenge since typical long-range radar can cost in the neighborhood of $20 million. As far as mitigation opportunities, options exist in software upgrades and hardware components that increase the sensitivity of the radar that can attempt to omit the static and dynamic obstruction of the turbines. An additional option is an in-fill or gap-fill radar, which consists of one or more lower cost radars (implementation depends on company) within the wind farm that provides resolution above the farm. The information from the in-fill radar can then be combined with existing units to provide a complete coverage map. There are various strategies and companies pursuing these options today, and preliminary results show promise.

Mitigation on the turbines is focused on reducing the RCS of the turbines themselves. RCS reduction, which is often referred to as “stealth,” addresses the impact on both dynamic clutter and Doppler since it makes the turbines appear significantly smaller to the radar. There are multiple methodologies to reduce RCS that are being investigated, and the preliminary analyses and tests show promise. All options being researched are taking into account key wind metrics to continue to ensure wind energy viability. These include economics, impact to manufacturing process, and impact to O&M, just to name a few. These mitigation options will never completely mask the farms, but they can provide a valuable methodology that either independently or in combination with radar options can facilitate the siting of projects.

Although it would be ideal to have the ability to replace the existing radar network with newer assets that are able to mask wind turbines and preserve mission, it will be some time before that can happen. In the meantime, mitigation options on both the radar and the turbines must be explored and implemented. As the number of installations increase, the siting challenges will most likely increase as this new technology fights for its place in our future. It is important to keep all missions in perspective, as in this case where we must balance national security and our new energy security mission. 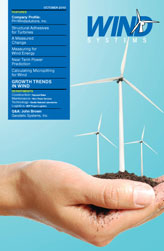 Syncing Up the Data

A Bolt of Knowledge