Offshore floating wind turbines (OFWTs) may hold the key to large-scale offshore wind energy. They can operate in deep waters, far from shore where visual impacts are negated and where the wind resource is generally strong and consistent. However, OFWTs have significant challenges as well, in particular the increased loading on the blades and tower due to the higher inertial and gravitational forces caused by the motion of the floating platform.

In a previous column in this space, the work of Stewart (a PhD student at UMass Amherst) and Lackner was highlighted. In this work, passive structural control devices were investigated and optimized based on their ability to reduce fatigue loads in OFWTs. Structural control is traditionally a field of civil engineering that has been successfully employed for over 20 years in large buildings and bridges in order to reduce loading caused by wind and earthquakes, as well as to increase building inhabitant comfort by reducing acceleration of the structure. The structural control devices were evaluated using FAST-SC, a modification of the aero-elastic code FAST, which Lackner developed in order to model additional structural control degrees of freedom in offshore wind turbines.  The optimal passive devices, determined using genetic algorithms, were shown to reduce fatigue and extreme loads in OFWTs by over 20% in some cases.

However, these previous investigations used an idealized passive structural control device, which is referred to as a tuned mass damper (TMD). The TMD utilized in the previous investigation consisted on a linear system with a mass, a spring, and a damper.  Non-linearities in the equations of motion were ignored, except for position constraints to prevent the TMD displacement from exceeding the dimensions of the nacelle or platform. These idealized TMDs were useful for evaluating the potential of passive structural control.  In the current research, Roderick (a M.S. student at UMass Amherst) and Lackner are evaluating realistic mechanical designs that can be used in practice to achieve the performance estimated by idealized simulations. In particular, it is critical to implement a passive structural control system that is both inexpensive and reliable, while still achieving good performance.

After evaluating a range of mechanical systems to be utilized as passive TMDs, tuned liquid column dampers (TLCDs) were selected as the best option due to their simplicity, low cost, and success in civil engineering applications.  A TLCD is simply a U-shaped container of water, with two vertical columns connected by a horizontal column. An orifice is located in the horizontal column. Since water is the primary component of a TLCD, it can be quite cheap, and there are no moving parts. As a building vibrates, or in this case an OFWT, the water in the TLCD flows back in forth through the columns. As the water height in one column becomes higher than the other, a restoring gravitational force will bring the water level back to equilibrium. Because this force is proportional to the displacement of the water, it acts as the equivalent to the spring in an idealized TMD. Likewise, as water flows through the orifice, hydrodynamic losses provide a source of damping that is proportional to the square of the velocity of the fluid, thus making this a non-linear system. TLCDs with both constant area horizontal and vertical columns, as well as varying area are possible.

In their research, Roderick and Lackner have optimized the dimensions of TLCDs to minimize fatigue loads on a variety of offshore wind turbines, including a fixed-bottom monopole, floating barge, and floating spar buoy. Parameters that can be optimized include the horizontal length, the vertical water column height, the damping, and the ratio of the vertical column cross sectional area to that of the horizontal column. The horizontal and vertical column sizes must be constrained by the dimensions of either the nacelle or the platform where the TLCD would be located. A Monte Carlo optimization was used, and optimal dimensions were determined. One important constraint emerged, as the maximum water displacement must be less than the total length of the TLCD.  As such, the damping values for optimal TLCDs tend to be larger than TMDs to restrict the water displacement.

In the optimizations conducted to date, the performance of optimized TLCDs shows promise. Fatigue load reductions are less than for idealized TMDs, but exceed 10% in some cases. Future work will also evaluate floating TLP and semi-submersible platforms. In sum, offshore floating wind turbines show promise for use in deep waters, but the increased loading from platform dynamics may lead to high structure costs. Utilizing optimized passive TMDs will reduce this loading, which will allow designers to use less material, and can lead to reduced overall system cost. TLCDs are a realistic mechanical system with low costs and no moving parts that can achieve significant load reductions in offshore floating wind turbines. 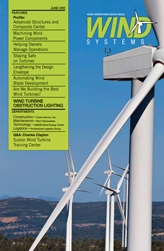