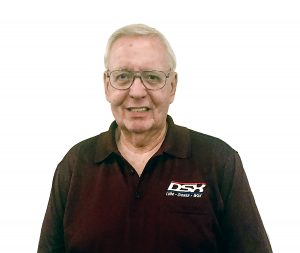 What can DSX offer the wind industry?

Two things are important: We can increase production at a relatively low cost, and we can increase the useful life of both internal mechanicals and external surfaces.

How did you discover your product would be advantageous to the wind industry?

I had a customer who was a retired nuclear power plant R&D engineer. In that capacity, he got connected as a consultant to wind energy activity with a large company. For no reason, other than he was hugely impressed with DSX, he volunteered that I needed to get into the industry.

He said, “Not only are you going to extend the life of the equipment, but you will increase the productivity,” and he told me what to do. He also told me no one in the industry has addressed the issue of modifying friction, and they live with whatever becomes the solution of the day as long as it’s easily accepted. And the biggest issue for them is they truly believe bigger is better, and all the industry wants is bigger units.

I have a customer who’s looking into what they can do to supply some assets with DSX products that they are now buying from me for other applications.

The bottom line is I was told I should use DSX wax on the blades and the hub, and I have to push to get the entire blade waxed, not just the leading edge. If they start using the wax, they’re going to want to use it on the leading edge, because that’s where they have damage that they can see and have to fix. But some of them don’t understand the benefit of better aerodynamics. My engineer colleague said they should, but sometimes it’s easier to approach obvious, easy applications, instead of working out the whole process.

He said there is something that grows on the hub, like an algae in parts of the world they may refer to it as a fungus, and he said they don’t understand they need to keep that algae or fungus from accumulating. There also is some reduction in heat from the wax, so he said he would also wax the nacelle.

He said the next issue, and the biggest issue, is to put DSX Extra, the engine additive, in the reduction gears. He said that’s where you’re going to give them the greatest benefit, because you’re going to make those gears work better, and with the temperature reduction we get, he said you will seriously improve the lubrication process and extend the useful life of the lubrication, whatever they’re using. And he knew at that point that you could mix DSX Extra with any of the lubricants that anybody uses. It’ll blend.

Your products are based on embedded-particle technology. Could you explain what that is, and how it’s a good fit for wind O&M?

The fluoropolymer particles do several things that are valuable when they’re in the lubricant. If you were to take your engine apart, you would have an accumulation of sludge and varnish and basic “yuck.”

The fluoropolymer particles will attack that yuck. It’ll knock the varnish or the sludge loose. It will end up in a filter. As long as your filter is a bypass filter, your oil will continue to lubricate. The result is a better fit and finish and less heat buildup.

With the wax, and still with the fluoropolymer, we’re still filling it and making everything smoother, whether it’s metal, glass, fiberglass, or whatever. And because it’s so smooth, there’s no place for dirt or whatever to adhere to it.

What are some of DSX’s proudest achievements?

When I was at the Cummins dealer, this customer rebuilt his engine at 1-million miles and started using DSX Extra in the engine oil, transmission fluid, and drive axle lube. After 2 million miles with DSX Extra, the top of a cylinder came off. The engine was then rebuilt at a Cummins engine rebuild facility. When he started with DSX Extra, he changed oil at 18,000 miles. He has been changing oil for years at 30,000 miles or more. His only engine expense with DSX Extra has been two sets of injectors.

Usually in an engine rebuild, it is possible to identify the cause of the failure. The Cummins mechanics found no indication as to cause and decided it was most likely metal fatigue. The Cummins dealer said they normally rebuild engines in the 700,000- to 800,000-mile range. He said in his 15 years with the company — this was the supervisor — he said he thinks they had done two engines at a million miles, and this is the only time they had done one at 2 million miles.

For the racing achievement, a colleague of mine applied my grease additive to the wheel bearings. It’s not a direct application. He mixed it with his previous lubricant.

Before doing that, it took two people to push the car around the shop. Now it takes one person — one hand on the rear spoiler — to push it anywhere he wants it. That’s how much we’ve reduced friction. The result is more horsepower available to go fast since there is less friction to overcome. This race shop builds and supports four cars racing in Trans Am 2 and SCCA Sprint 2 (500 HP engines).

With a second racing operation, the team owner reported that, before DSX Extra, the camshaft was dry when it was in the shop and rust accumulated on the camshaft. The engine is a 250HP overhead cm Ford product. With DSX Extra in the engine oil, the cam shaft is always lubricated — there is no rust.

What do you hope to accomplish by introducing your product to the wind industry?

What is the problem with the reduction gears that burn up in wind energy? The issue becomes heat, and eventually something jams up or burns up, and then the whole thing falls apart.

When used in a truck, the temperature gauges were checked periodically, because the results were hard to believe. Engine oil was 195 degrees F on Day 1. With DSX Extra in there, it went down to 150 degrees. The same results happened in the transmission fluid. A transmission and an engine are not comparable to a reduction gear, but the drive axle, or the differential on your car, or the drive axles on the truck, which are basically really big differentials, are directing the flow of lubricant to do a job, so the drive axle or differential is very similar to a reduction gear. The lube temperature of the truck went from 185 to 125 degrees and stayed there while we were keeping those records for more than six years.

Now, let’s go back to that differential that’s similar to a reduction gear. The Arrhenius Rate Rule states that for each 10 degrees C (18 degrees F) change in lubrication temperature, there is a measurable change in the useful life of a lubricant. That is, a 10 degree C increase reduces the useful life by half, and a 10 degree C reduction in temperature increases the useful life by double. We went from 185 to 125 degrees, so the first 18 degrees meant we just doubled the life of the lubricant. The next 18 degrees, we double it yet again. And the next 18 degrees, we double it yet again, and we still have some extra degrees worth of reduction of extended life.

Now, you start putting those numbers together, let’s go back to my 2 million miles.

According to the trucking industry, that’s worth about 44,000 hours.

So, basically what I’m saying is we’re going to lower the temperature by upwards of 60 degrees in a reduction gear. We’re going to keep it cleaner, and we’ll extend the useful life of the lubricant significantly.

Basically, I know from what we’ve done that we can accomplish similar results with wind energy.

Where do you see wind in the next decade, and DSX’s place in that future?

Reading the literature, I’m going to say that there is enough interest in politics to substantially increase the wind-energy industry. I know the percentage of improvement that if they do what I suggest — wax the blades, the hub, and treat the reduction gear — I know how much DSX products should improve the energy output.

Basically, I see DSX extending the life of the equipment, which makes the payoff easier, and will increase efficiency by (1) reducing friction internally and increasing the life of lubricants and (2) improving and maintaining aerodynamics of blades by reducing surface friction.