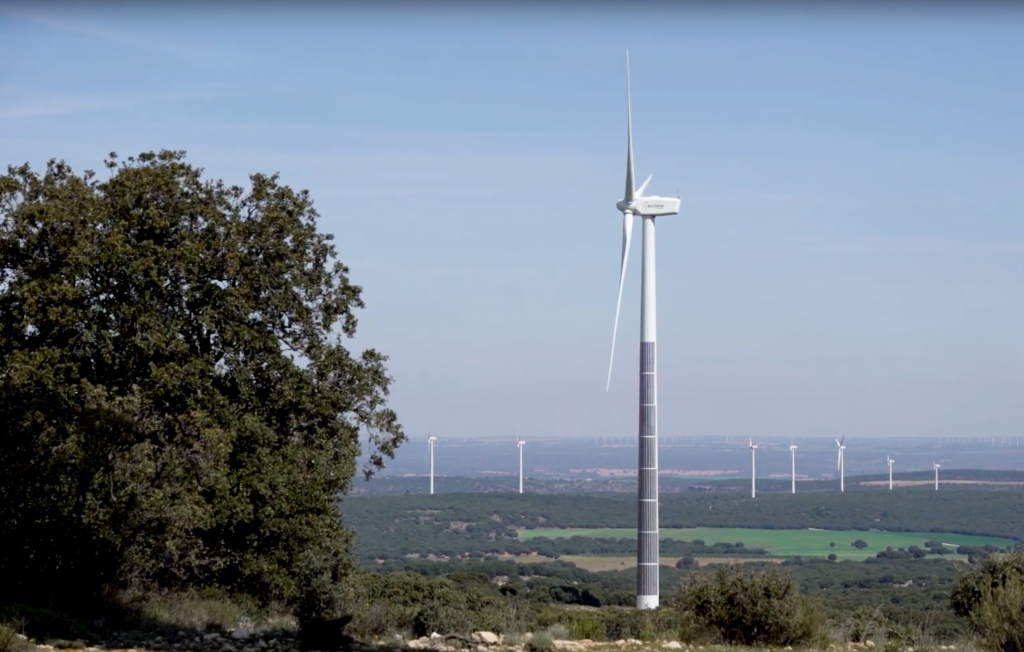 The Energy Division of ACCIONA has developed a pioneering solution in the field of hybridization between wind and photovoltaic power. It consists of covering a wind-turbine tower with flexible organic panels to produce energy for the internal electricity consumption of the turbine.

The innovative project will allow the study of the performance of the organic panels — an emerging photovoltaic technology — and their application to improve wind-turbine efficiency.

The system has been installed in one of the turbines of the Breña Wind Farm in Albacete, Spain, which Acciona owns and operates. The turbine is an AW77/1500 of Nordex-Acciona Windpower technology, mounted on an 80-meter-high steel tower (hub height).

Installed on the tower are 120 solar panels facing southeast-southwest to capture the maximum of the sun’s rays throughout the day. They are distributed at eight different heights, occupying around 50 meters of the tower’s surface area. The photovoltaic modules, with an overall capacity of 9.36 kilowatts peak (kWp), are of Heliatek technology (HeliaSol 308-5986 model). They are only 1 millimeter thick, and each one has a surface area of 5,986 x 308 mm.

In contrast to the conventional technology used in the manufacture of photovoltaic models based on silicon, these organic panels use carbon as raw material and are characterized by their structural flexibility, which makes them adaptable to different surfaces. Other key features are lower maintenance costs, less energy consumption during manufacture, easier logistics, and the complete recycling of the materials used, although their efficiency is still below that of silicon modules.

“The hybridization project in Breña means the optimization of the use of space for renewable energy production, and it will enable us to test the efficiency of organic photovoltaics, a technology that we believe has one of the best improvement curves in terms of technological efficiency,” said Belén Linares, energy innovation director at Acciona. “That is why we have decided to pilot it.”

The immediate application of the Breña project is to produce part of the energy that the internal systems of the wind turbine need. When the turbine is running, some of the energy generated is used to power the auxiliary systems. In shutdown mode, certain systems need to continue functioning so they are fed from the grid, which means that the wind turbine is registering a net consumption of energy.

The new photovoltaic system with panels on the tower will be able to cover, completely or partially, the energy demand related to the operation of the wind turbine when there is solar radiation, or even — in a possible later phase of the project — when the sun is not shining. This would be done through a battery storage system, leading to an improvement in the net production sent to the grid.

The organic panels are connected to two inverters that convert DC into AC for later connection to the grid, which supplies the electrical equipment of the wind turbine.

The entire system is monitored with a view to evaluating it under real conditions, both from the point of view of energy production and degradation of the solar modules. Conceptually, it is a very innovative design in relation to previous experiences in wind power-photovoltaic hybridization, based on panels installed on the ground.

The idea is part of a wide-ranging innovation project driven by Acciona to study a number of emerging photovoltaic technologies, with the aim of pioneering the adoption of more efficient solutions in each case and consolidating its leadership as a PV developer. The company currently has more than 1,200 MWp in operation or under construction in different parts of the world.

RE:Wind 2022 is a B2B networking event for more than 250 wind energy decision makers that covers strategic goals and 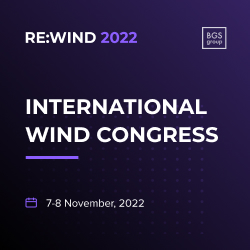 RE:Wind 2022 is a B2B networking event for more than 250 wind energy decision makers that covers strategic goals and technical issues of the offshore projects and provides attendees with B2B meetings and insightful discussions on the future potential of the clean energy market.

RE:Wind 2022 is the first BGS Group event dedicated to renewable energy. The Congress brings together key clean energy players to discuss the hot trends of the industry and the potential for market growth in European wind. The insightful sessions will cover the life cycle of the wind turbines, digital optimisation of wind farms, FOW, 2030 plans, cost-cutting technologies, project challenges, the role of clean energy and more.

Creating a roadmap for a new renewable energy grid: Connecting 30 GW of wind energy to the electric grid is one of the biggest challenges (and supply chain opportunities) facing

Creating a roadmap for a new renewable energy grid:

Connecting 30 GW of wind energy to the electric grid is one of the biggest challenges (and supply chain opportunities) facing the U.S. offshore wind industry. Subsea cable installation, shared grid ownership, underwater mapping, cable landings, and shoreside substations are a few of the infrastructure requirements needed to realize the federal 2030 energy goal.

Join us in Charleston, South Carolina to learn how your business can be part of the solution to building these underwater cable highways and their inter-connection systems.

The Business Network for Offshore Wind’s Ventus Gala brings together the global offshore wind community to celebrate our collective accomplishments as well as honor the leaders and innovators that inspire the industry with ingenuity and confidence. Join your peers and colleagues at the annual black-tie event in Washington, D.C., and enjoy an evening of coming together to share in the growth, achievements, and excellence in our industry.