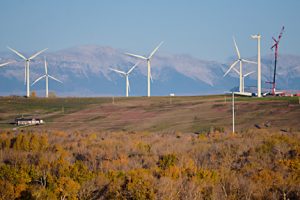 The Canadian Wind Energy Association (CanWEA) commends the Alberta Electric System Operator (AESO) and the Government of Alberta for its continuing success in attracting some of the lowest prices ever seen for wind energy generation in Canada.

This news comes with the recent announcement of contracts for Rounds Two and Three of the Alberta Renewable Electricity Program (REP).

The AESO will secure power from five new wind-energy projects representing 763 MW of capacity at an average weighted price of $39 per megawatt-hour.

The companies behind the projects have each signed a 20-year Indexed Renewable Energy Credit (IREC) agreement with the AESO, providing predictable revenues while protecting Albertans against increases in the price of power. Under the IREC, when the market price is lower than the contracted price, the generator will be paid the difference; and when the market price is higher, generators will be required to pay back the difference to the government.

As mandated by the procurement process, all of the projects providing power through REP Round 2 (363 MW) meet the required minimum 25 percent equity partnership with Indigenous communities. Such partnerships have also been seen in other jurisdictions across Canada and have proven to provide training opportunities, jobs, revenue sharing and other economic benefits to participating communities.

The projects are expected to be operational by mid-2021.

The wind-energy industry looks forward to details about the schedule of future procurements for new renewable energy and will be active participants in the process.

“By attracting investment in the wind energy projects announced, Alberta is diversifying its economy, driving economic growth, and creating much-needed jobs in multiple sectors such as engineering, construction, and local services,” said Robert Hornung, CanWEA president. “Indigenous and rural communities around the province will benefit from the employment opportunities, and income streams associated with ownership, municipal taxation, or lease payments for landowners. We are pleased that these competitive renewable electricity procurements are resulting in very low costs for the non-emitting electricity that Alberta needs.”

“The competitive nature of these procurement processes made it possible to secure low-cost power for the Alberta grid,” said Evan Wilson,
CanWEA regional director – Prairies. “That in turn provides an incredible opportunity for significant and sustainable greenhouse gas reductions in the electricity sector while also presenting Albertans, particularly Indigenous and rural communities, with new job and economic opportunities.”