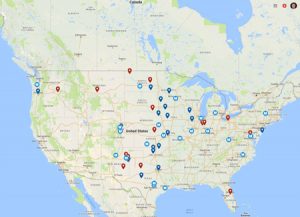 America celebrates U.S. leadership in wind energy production and the benefits it creates this week as American Wind Week 2018, August 5-11, officially kicks off.

Wind power is an affordable, reliable and rapidly growing segment of the U.S. electricity supply that supports jobs in all 50 states. Those benefits help drive broad popular support for wind power, on display this week at nearly 30 events in over 15 states, on social media, and through proclamations from governors and mayors from Washington to Kansas and North Carolina.

“This American Wind Week, we salute the more than 105,000 U.S. workers who make it possible to transform the power of wind into affordable electricity that our families and businesses rely on,” said Tom Kiernan, CEO of AWEA. “We’re building more U.S. wind power today than ever before. This is what leadership looks like — growing economic opportunity, homegrown energy, and cleaner air from sea to shining sea.”

Supporters of wind energy across the U.S. launched American Wind Week last year when wind power became the country’s largest source of renewable energy capacity. Today, that leadership is growing with a record amount of wind power under construction at wind farms across America. The U.S. possesses world-class wind resources, with some parts of the heartland and coasts known as the “Saudi Arabia of wind,” and U.S. wind farms are the most productive among countries with the highest levels of installed wind power such as China and Germany.

The economic and environmental benefits of U.S. wind power are substantial. A record 105,000 Americans work in wind power across 50 states, affordably and reliably supplying more than 6 percent of U.S. electricity. In fact, wind-turbine technicians and solar installers are the nation’s two fastest growing jobs, according to the Bureau of Labor Statistics. And using wind energy created $8 billion in public health savings during 2017 alone by avoiding air pollution that creates smog and triggers asthma attacks.

The week’s events range from a community barbeque in New Mexico to a wind farm tour in North Dakota. If you can’t make it to a Wind Week event in your state, you can still participate by sharing why you’re proud of American leadership in wind power with #americanwindweek on social media.