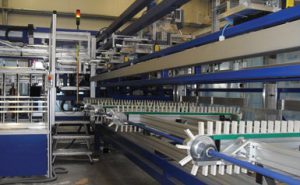 The leading world market producer of work cages/service lifts, ladder systems, and other personal safety systems for wind turbine towers, Avanti Wind Systems (see article in this issue), is starting up production of ladder systems for wind turbine towers in the United States. Avanti Wind Systems has completed a factory for manufacturing of aluminium ladders at the company’s North American headquarters in New Berlin, which is close to Milwaukee, Wisconsin. The factory is intended to supply the North American wind market. Until now the company has manufactured its ladder systems in China and Germany. These factories will continue manufacturing for the rest of the world.

“The factory in Wisconsin will enable us to move employment to the U.S., while also allowing us to give faster and better service to our customers throughout North America,” says Kent Pedersen, general manager for Avanti Wind Systems in the U.S. The location also gives Avanti and its customers considerable advantages. Finished ladder systems take up a lot of space given the amount of raw aluminium involved. Moreover, the shorter transport times will reduce the amount of damage during transport, which typically occurs during the transport and handling of aluminium ladders, with the consequent major savings in transport costs. The new Wisconsin factory will manufacture ladder sections of up to six meters in length. The sections are subsequently assembled when they are installed in the towers.

“Avanti ladders are tested against North American requirements, which include ANSI 14.3,” Pederson says. “Physical tests are performed by Radco, an independent test institute. These show safety factor three for regular duty ladders and safety factor five for heavy duty ladders. This puts them among the best built ladders in the U.S.” For more information call (262) 641-9101 or visit www.avanti-online.com.