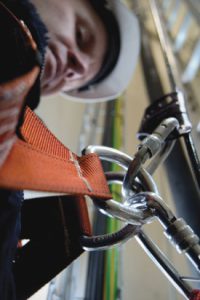 Avanti Wind Systems announces that 141 new wind turbines in Oregon are to have its climb assistance equipment installed. This system makes it easier for service technicians to climb up and down the ladders in wind turbines. The new turbines will be installed in Biglow Canyon for Portland General Electric. Construction of the first 65 wind turbines began in April this year, with the remaining 76 to be installed in 2010.

In simple terms, Avanti climb assistant consists of an endless rope fastened to the technician’s harness with a clamp of the same type used in mountain climbing. Giving a gentle tug starts a motor that pulls on the rope, thus facilitating climbing. The rope runs along the ladder, and the pull weight is set by the technician. The safety systems ensure that the user can stop the system at any time because the pull weight is set so that the technician only need stand still on the ladder and, after a few seconds without movement, the pull force stops. The weight is also lightened in a similar way on the way down.

Avanti Wind System is leading world market producer of service lifts and other personal security systems to wind turbine towers. In addition, the Avanti Training Program covers all training needs concerning the company’s products, evacuation, fire precautions, rescue, health, and safety. The company’s service lifts, ladders with build-in fall safety rail, and climbing assistance have been approved in accordance with official standards in the Unites States, the European Union, and Australia. Learn more by calling (262) 641 9101, sending e-mail to kp@avanti-online.com, or going to www.avanti-online.com.