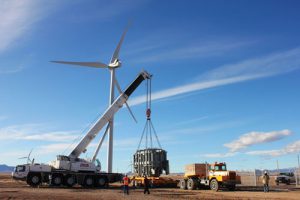 “This project truly showed off our abilities as a heavy hoisting and hauling company,” says Chris Martin, marketing coordinator at Crane Service. “Not only were we able to offload the shunt reactor, we are able to move it into place with our prime mover and transport dolly.”

Crane Service, Inc., specializes in rigging, heavy hoisting, and heavy hauling. It has been serving the greater southwest for more than 50 years. With four locations—Albuquerque, Bloomfield, Chaparral, and Sweetwater, Texas—it is able to serve the greater southwest’s heavy hoisting needs. The company’s fleet is able to serve a wide spectrum of clientele, from 8.5 to 550 tons. It is continually raising the bar for what a crane rental company can be. Contact Martin at (505) 710-5844 or cmartin@craneserviceInc.com. To view a video of the operation go online to www.craneserviceinc.com or visit the Wind Systems Facebook page.