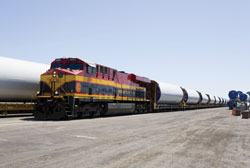 KCSR worked with Port Corpus Christi to coordinate the move, and Kansas City Southern de México S.A. de C.V. helped coordinate transportation and car distribution. Last week the movement of the first two 50-car unit trains by KCSR was its first wind energy component movement from Port Corpus Christi. “We are very pleased to be able to work with KCSR,” says John LaRue, executive director (see Q&A in this issue). “Having one more Class-I rail option to move the wind components from our port, along with our deep, uncongested channel and strategic location in the Gulf of Mexico, gives the port a better opportunity to serve the growth of wind energy components and other project cargoes.”

The primary economic engine of the Coastal Bend, Port Corpus Christi is one of the 10 largest ports in the United States in total tonnage. The port’s mission statement is to serve as a regional economic development catalyst while protecting and enhancing its existing industrial base and simultaneously working to diversify its international maritime cargo business. Strategically located on the western Gulf of Mexico, with a straight 45 foot-deep channel, the port provides quick access to the Gulf and the entire United States inland waterway system. The port delivers outstanding access to overland transportation with onsite and direct connections to three Class-1 railroads and uncongested interstate and state highways. The port is protected by a state of the-art security department and an award-winning environmental management system. With outstanding management and operations staff, Port Corpus Christi is clearly “More Than You Can Sea.” To learn more call (800) 580-7110 or go online to www.portofcorpuschristi.com.