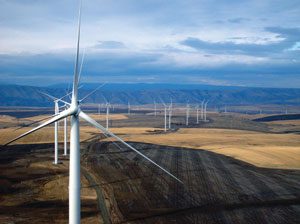 Portland General Electric Company announces the first turbines assembled for Phase 3 of its Biglow Canyon Wind Farm have begun generating electricity and supplying power to the Pacific Northwest’s electricity grid. Twenty-four turbines are currently generating power, with all 76 turbines in Phase 3 expected to be completed by the end of the third quarter of 2010. “Bringing the first turbines of the final phase of Biglow Canyon Wind Farm online represents a big step in developing more renewable energy resources for our customers and for the growing wind energy development in the region,” says Jim Piro, PGE president and CEO. “We expect to have the entire 450-megawatt wind farm online on time and on budget.”

The $1 billion Biglow Canyon Wind Farm is PGE’s first fully owned wind power facility. Phase 1 of the project began producing power in December 2007 with 76 turbines and Phase 2 in August 2009 with 65 turbines, with a combined generating capacity of 275 megawatts. The addition of the final phase will bring the total installed capacity to 450 megawatts. Given the variability of wind power the plant is expected to produce an average of around 150 megawatts, enough to power the homes of about 125,000 average PGE residential customers.

Trucks carrying wind-turbine parts for the final phase began arriving at Biglow Canyon in April 2010, with about 10 truckloads required to assemble a single wind turbine. Each of the 415-foot-tall turbines, from base to tip of blade, has a generating capacity of 2.3 megawatts. Phase 3 is providing jobs for about 150 employees and contractors during construction.

The Biglow Canyon Wind Farm is located near Wasco in Sherman County, Oregon. It is PGE’s largest renewable energy project. When complete it is also expected to be one of the largest wind power facilities in the Pacific Northwest. In addition to providing carbon-free and emissions-free generation of electric power the wind farm is creating jobs, providing income for local businesses, generating tax revenues for local government, and providing easement payments to landowners. The Biglow Canyon project was developed by Orion Energy LLC. It is being built by PGE, which also owns and operates it. Headquartered in Portland, PGE is a fully integrated electric utility that serves approximately 817,000 residential, commercial, and industrial customers in Oregon. Visit online at www.portlandgeneral.com.