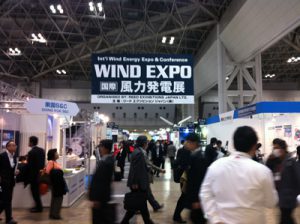 With renewable and green energy sources making global headway in recent years, surging interest has spawned an increasing number of renewable energy conferences and exhibitions. While everyday consumers can make small changes to reduce their carbon footprint, the most marked impact can be seen when the industry starts implementing green technology. In order to stay current on technological  innovations, as well as perform routine business functions such as networking,  the industry relies on expositions and conferences.

Throughout Asia, industry leaders have, for a number of years now, turned to World Smart Energy Week, hosted by Reed Exhibitions.

The 2013 event was held February 27–March 1 at Tokyo Big Sight. Due to high demand, the inaugural WIND EXPO was added to the event this year. Participation in the WIND EXPO was more than respectable considering the infancy of that portion of the conference.

Among the organized events at the WIND EXPO portion of the event were technical conferences and product and technology seminars, in addition to the exhibition and the keynote sessions. The keynote session was held at 2 p.m. local time on February 27, and was entitled “Industry Leaders’ Strategies and Outlook on Wind Power Generation.”

Occupying a substantial section of the east hall at the convention complex, WIND EXPO was filled with attendees. More than 100 exhibitors from across the globe eagerly promoted products, services, and technologies that ran the gamut of wind energy production and associated industries. No known segment of the industry was left unserved by the exhibition.

Innovative wind turbine design was displayed prominently, as were  energy-conservation  components. Short tutorial demonstrations of various types and brands of safety gear and its’ proper use were presented several times an hour.

A primary event focus was the development of, and the large, timely technological advances in making offshore wind farms a substantial source of energy within the Asian markets­—Japan in particular.

Varied design approaches were offered by different exhibitors, but the prevailing and most-popular topic centered around offshore floating wind turbines. Many of these platform designs combined wind and solar energy technologies as a viable, sustainable, efficient means for  green energy generation.

Of particular interest among those in attendance  was Fukushima Forward, which seeks to replace traditional energy sources with offshore wind farms located in the ocean. These turbines would collect wind and solar energy and then redirect the collected power to a central hub that could then convert the power to be used across Japan. If successfully implemented, the plan would serve as an example to future energy projects on the viability of offshore wind energy as an option when seeking to replace aging, unsustainable power supply methods.

In its inaugural event, the WIND EXPO was a resounding success at introducing new technology and providing vital networking opportunities within the field. Attendees and exhibitors alike appeared eager to make new business connections and to learn about new technologies. Foundations have been laid to make future shows larger and more successful.