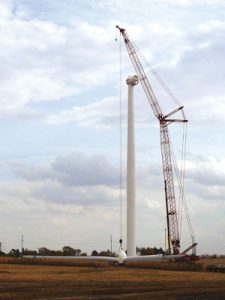 Mortenson Construction has started construction of the Shady Oaks Wind Farm near Compton, Illinois, adding 109.5MW to the state’s wind energy capacity. The wind power facility will consist of 71 Goldwind turbines. Mortenson is responsible for the design and construction of access roads, collection system, foundations, and the erection of the turbines. The Shady Oaks project will be the fifth utility-scale wind facility that Mortenson has constructed in Illinois, bringing the total number of turbines erected in the state to 541 upon its completion. Construction started in late August and is expected to be complete in early 2012.

According to the Illinois Wind Energy Association, an average 100MW wind farm in Illinois creates 125 to 150 temporary construction jobs and 10 permanent maintenance jobs, which is consistent with the number of jobs that will be created with the Shady Oak Project. “The Shady Oaks project is the first partnership of Mortenson and Goldwind and the first major wind project in the U.S. to utilize the advanced Permanent Magnet Direct Drive Technology (PMDD),” according to Tim Maag, a vice president and general manager of Mortenson’s Renewable Energy Groups.

“We selected Mortenson as our construction partner for the Shady Oaks project because of their outstanding track record of success with wind farm construction and because of the commitment to on-site safety,” said Tim Rosenzweig, CEO of Goldwind USA.  “We are pleased to be working with Mortenson on this important project.”

Founded in 1954, Mortenson Construction is a U.S.-based, family-owned company that has constructed more than 100 wind projects generating more than 11,000MW of renewable power throughout the United States and Canada. Visit www.mortenson.com/wind. With offices and facilities throughout Asia, Europe, and the Americas, Xinjiang Goldwind Science & Technology Co, is ranked among the leading wind turbine manufacturers in the world. Learn more at www.goldwindamerica.com.