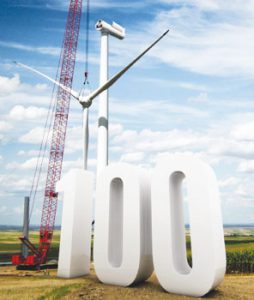 MidAmerican Energy Company has selected Mortenson Construction to build the 443.9MW Rolling Hills Wind Project in southwestern Iowa, one of the largest wind projects in the nation. MidAmerican Energy—which is number-one in the U.S. in ownership of wind-powered electric generation among rate-regulated utilities—selected Mortenson, North America’s leading wind power contractor, to build the project.

“The Rolling Hills Wind Project is truly a landmark project for Mortenson and the wind industry,” according to Tim Maag, a vice president and general manager of Mortenson’s Renewable Energy Groups. “Having entered the renewables industry in its infancy, Mortenson is proud to achieve such a significant milestone. This is our largest wind power project to date, and it is a testimony to the strength of our industry partnerships and the depth of experience our team members bring to wind power construction.”

Together the Rolling Hills, Laurel, and Pomeroy IV wind projects span more than 150 square miles over six Iowa counties: Adair, Adams, Calhoun, Cass, Marshall, and Pocahontas. MidAmerican Energy has 1,393MW of owned and contracted wind generation facilities in Iowa. According to the American Wind Energy Association, Iowa ranks second in the nation for total number of installed megawatts of wind power and first in the nation for the percentage of electricity generated by wind power. The Rolling Hills Wind Project is the 13th wind power facility built by Mortenson in Iowa, and the sixth wind project built by Mortenson for MidAmerican Energy. During construction of the Rolling Hills Wind Project, Mortenson will erect 193 2.3MW Siemens wind turbines. This is enough electricity to power approximately 190,000 average American homes. Mortenson also will install access roads, underground collection, and tower wiring. The project will become operational by late 2011.