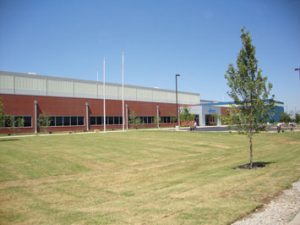 Nordex has begun production at its newly built wind turbine manufacturing plant in Jonesboro, Arkansas. The plant’s first production crew recently began assembling a wind turbine nacelle, which houses the engine and other key components and sits high atop the turbine tower. “Two years ago we announced our intention to make Nordex wind turbines in the U.S., for the U.S.,” says Ralf Sigrist, president and CEO of Nordex USA, Inc. “Today we’re putting our hands to the metal and doing it. We hope Congress will do the same by finally passing meaningful renewable energy legislation.”

The first Jonesboro production crew completed a 10-week intensive training program at Nordex’s flagship plant in Rostock, Germany. Training will continue during the early phase of production, with the team’s German counterparts taking up residence in Jonesboro for several months to work alongside their new colleagues.

“There’s no way to do this without international exchange,” according to Joe Brenner, vice president of production. “Wind energy has tremendous potential in the U.S., but it’s about more than just creating green jobs. We have to transfer expertise in order to build a wind industry workforce. Nordex is investing in such a workforce and bringing the needed skills to America.”

Nordex broke ground on its manufacturing plant last September, pictured above, completing construction in July of this year. The company has hired 150 employees in the U.S. to date, including 42 in Jonesboro, and has plans to employ up to 1,000 nationally over four to five years. About 80 percent of the workforce in Jonesboro are locals. Construction on a second facility for assembling rotor blades is also planned for the future.

As a technological leader among suppliers of megawatt turbines, Nordex benefits particularly from the global trend towards large-scale wind turbines. The product range includes one of the largest series wind power systems in the world (N80/N90/N100, 2,500 kW) with more 1,300 of these turbines having been produced to date. This means that Nordex has a crucial edge in terms of experience in operating large turbines compared to most of its competitors in the sector. Overall, Nordex has installed a more than 4,200 turbines with a capacity in excess of 6,000 MW around the world. For more information visit www.nordex-online.com.

Leadership In the Age of Transition We are in the midst of a dramatic paradigm shift. The world has awoken to climate change; the time for the energy industry to stand

Leadership In the Age of Transition

We are in the midst of a dramatic paradigm shift. The world has awoken to climate change; the time for the energy industry to stand up and be counted has arrived. The way in which we produce, distribute and use energy will undergo a radical transformation over the next two decades.

This 2-day strategic summit will shed light upon how the transition will be led, governed, and financed. We’ll establish what the future energy system will look like and offer companies, from across the asset spectrum, a definitive guide to their ET strategies, combining onstage inspiration and offstage Chatham House Rule Discussions.

The Energy Transition will be a period defined by uncertainty. We can, together, lighten the way forward.

Uniting Key Decision Makers from Across the Energy Spectrum

To succeed in the age of transition, industry must come together to understand both risk and opportunity. The Energy Transition Summit will unite key leaders from across both the private and public sectors, to provide leadership, build partnerships and shed light upon the defining issue of our time.