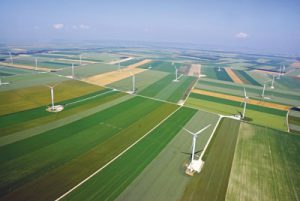 With 30 N100/2500 wind turbines and a total capacity of 75 MW, the Germinon wind farm located to the west of Paris is currently the largest Nordex wind farm in France. On April 6, 2011, the customer GDF Suez officially inaugurated the wind farm. Germinon features the first Gamma Generation series turbines, which Nordex launched in spring 2010. In developing this high-efficiency class, Nordex drew on its 10 years of experience in the operation of multi-megawatt turbines. The Gamma Generation combines proven technology with specific enhancements derived from the latest research and meeting current market requirements.

With the N100/2500 turbine, utility GDF Suez selected a wind power system that makes optimum use of the mean wind speeds of 7.4 m/s prevailing at the site. As a result, the wind power systems will deliver a combined total of some 226,000MWh of clean energy each year, sufficient to cover the electricity requirements of around 265,000 people. Nordex handed over the wind farm to GDF Suez back in autumn 2010. Briefly after connection to the grid, the majority of the turbines achieved a reliability of over 97 percent.

During the execution of the project last year Nordex organized more than 360 heavy-load hauls to transport the turbine components to their destination. In fact, if all the towers segments were to be laid out end to end they would have a total length of three kilometers. For more information go to www.nordex-online.com.