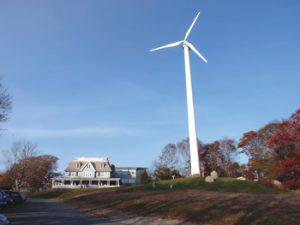 Northern Power Systems, a next-generation wind turbine company, announces that its NPS 100 permanent magnet direct drive (PM/DD) wind turbine fleet has achieved more than two million hours of operation. The Company’s 100 kW fleet has been operating at more than 98 percent availability since 2008, which means that turbine owners benefit from high-energy production and little downtime. Over 175 NPS 100 wind turbines are installed and operating in 25 states in the United States, Bahamas, Canada, Italy, Ireland and the United Kingdom.

Just over one year ago, Hurricane Irene, a Class III hurricane, passed directly over two NPS 100 turbines in the Bahamas. As a testament to the robust design and safe operation of Northern Power turbines, the turbines detected high winds of up to 107.1 mph (47.9 m/s) and automatically entered safe mode. The following morning, the NPS 100 turbines returned to normal operation without any intervention. NPS turbines are designed to stand up to winds up to 133 mph (59.5 m/s).

“Our NPS 100 customers get clean, cost effective renewable energy from turbines that fit perfectly in remote locations as well as industrial areas and communities. The turbine’s reliable, safe and simple operation gives owners peace of mind and delivers the highest energy output in its class for the best return on their investment,” said Reinout Oussoren, Vice President of Global Sales at Northern Power Systems.

“We are very proud to have achieved the two million hour milestone while maintaining high fleet availability,” said Troy Patton, President and CEO at Northern Power Systems. “Northern Power’s PM/DD technology delivers the performance and reliability that are fundamental to the long term success of distributed power generation around the world.”