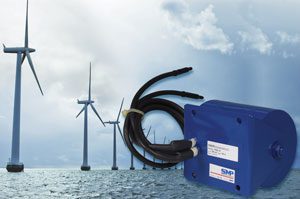 SMP’s chokes for inverters in wind turbines are now also approved for use in offshore installations. These inductive components feature low losses, very low stray fields, and a highly compact design. The chokes’ cores consist of powder composites, which SMP has specifically engineered for this application.

The direct current from the wind turbines must be converted into a sinusoidal waveform with the values required by the grid. The converter’s filters, which consist of capacitors and filter chokes, ensure that the current being fed into the grid exhibits a near sinusoidal waveform. To maximize the inverter’s efficiency, its components must exhibit low losses. The materials that SMP developed especially for use in its energy-efficient, high-performance chokes have low magnetostriction and exceptionally low eddy current and hysteresis losses. Their encapsulated design ensures that the power converters emit only low-intensity stray fields, so that they do not affect other components. The chokes have a space-saving compact design, are maintenance-free, and have a long lifespan—a significant contribution to cutting the maintenance costs for offshore wind turbines.

Offshore wind turbines are prone to corrosion. To protect them from the corrosive action of the seawater, special salt-resistant materials, additional corrosion protection, and a complete encapsulation of certain subassemblies are necessary. SMP’s inductive components for wind turbine inverters are now certified IP66 and approved for use in offshore installations. Because of their high protection class of IP66, these chokes can be fitted outside the inverters, which means that the heat generated by the choke is not discharged inside the inverter. This results in a lower internal inverter temperature, which removes the need for cooling fans, saving both energy and installation space.
Placing the choke outside the inverter has the further advantage of reducing the inverter’s overall dimensions, which further cuts space and energy demand. To simplify mounting outside the inverters, SMP provides the chokes with special mounting fixtures. The choke and the mounting plate are fitted on the device’s outside and the connecting cables pass through a sealed opening.

SMP’s product range includes low-loss inductive custom components based on in-house-developed powder composites, such as filter, commutating, step-up converter, power recovery and single-conductor chokes. Many of its products are used in the railway industry. The market for inverters for photovoltaic systems that feed solar energy into the electricity grid and for converters for wind turbines is also experiencing strong growth. In the United States contact Keith Westendorf, Westendorf Associates, Inc., at (414) 380-9730, kwestendorf@westendorfassoc.com, or www.westendorfassoc.com. Also go to www.smp.de.