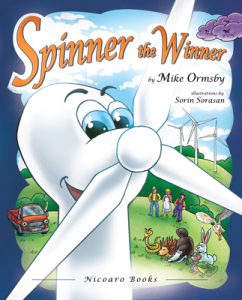 How do we explain the function and technical aspects of a wind turbine to an inquisitive young child? If you’ve ever wondered, help is at hand in the shape of Spinner the Winner, a new picture book for children.

British author Mike Ormsby is based in Azerbaijan. Ormsby said he got the idea for the talking turbine while working on assignment as a journalist.

“I was with BBC Wales in the early ‘90s and reported on a row about a wind farm. I’d never seen a turbine up close; their elegance and personality impressed me. The nacelle is like a face. I noticed some confused kids, too…

Spoiler alert! Here’s the plot…
Spinner is a young turbine, separated from his family on installation day. He develops a squeak and is vandalized by villagers. He’s alone, unloved and unhappy. But when a windy storm causes a blackout, Spinner triumphs over prejudice and adversity to save the day, winning hearts and minds.

“It’s about how turbines generate power AND controversy,” Ormsby said. “I stashed the story for 20 years, until my wife spotted its potential for self-publishing. She found an illustrator from Transylvania, Sorin Sorasan. We spent 10 months preparing to publish in two editions­­—full color, plus black and white for younger kids to color-in. Corporate sales took off, from day one.”

Four big players in European wind energy—CEZ, GDF Suez, ENEL and RWEA—have sponsored a branded Romanian translation. The book will soon be translated into French and Serbian. The English version is doing well on Amazon, downloaded free almost 3,000 times recently and recommended by the online educational resource, Kid Wind Project. Ormsby said he hasn’t profited from the book yet, but remains optimistic. “The main thing is, kids love it. That’s crucial,” the author said. “One lad asked if Spinner would ever be a cartoon on DVD. They’re always one step ahead!”

For more information about “Spinner the Winner,” visit www.spinnerthewinner.wordpress.com. Also, log on now to the Wind Systems Facebook page (www.facebook.com/windsystemsmag) for a chance to win one of two free copies of the book.