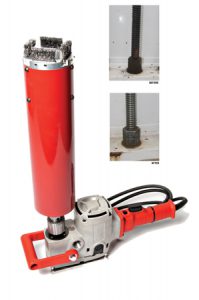 Cleaning the anchor bolts on a wind turbine tower for the purpose of re-tensioning and/or coating with a non-corrosive coating can be accomplished a number of ways. One of the most efficient and effective  methods used to clean rust from the anchor bolts is by using the Shipman Anchor Bolt cleaning tools.

Towers often vary  in the size of the bolt, nut and the distance of the bolt and nut from the side of the tower.  These dimensions are critical in the sizing of the tools in order to achieve maximum cleaning.  If grease is present on the bolts, Windrush and Shipman suggest that the bolts be power washed prior to cleaning with the brushes in order not to smear the grease and to keep the brushes from fouling with grease.

For more information about Windrush and the Shipman tools visit www.windrushllc.net or email us at sales@windrushllc.com.