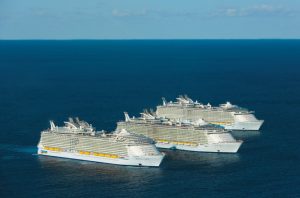 Royal Caribbean Cruises Ltd. announced it has signed an agreement with Southern Power, a leading U.S. wholesale energy provider and subsidiary of Southern Company, for Southern Power’s 200-MW Reading Wind Facility. This initiative, which will offset up to 12 percent of Royal Caribbean’s emissions beginning in 2020, is the latest addition to the company’s extensive sustainability efforts, which include programs to reduce greenhouse gas emissions through innovations at sea and in port.

“This agreement complements our longstanding strategic initiatives to reduce the company’s emissions and become a more sustainable operator,” said Richard D. Fain, chairman and CEO of Royal Caribbean Cruises Ltd. “We are constantly looking for new ways to reduce our environmental footprint, both in the short and long term, and thanks to our partnership with Southern Power this is the latest step in our journey.”

The facility is expected to generate roughly 760,000 MW/h per year over the duration of the 12-year agreement, which translates to enough clean energy to offset 10-12 percent of Royal Caribbean’s annual carbon emissions starting in 2020. With this innovative program, Royal Caribbean is able to apply a new approach while continuing its primary initiatives to advance sustainability efforts across the company’s fleet.

Royal Caribbean has a longstanding commitment to environmental stewardship, which the company expanded in 2016 to set ambitious and measurable goals to reduce the company’s environmental footprint. In addition to the agreement with Southern Power, Royal Caribbean is also employing several technologies and innovations to reduce greenhouse gas emissions and create more efficient vessels, including:

Royal Caribbean also encourages guests to make a positive impact on the environment through Save the Waves, its onboard stewardship program focused on reducing waste; reusing and recycling; and properly disposing of remaining waste.