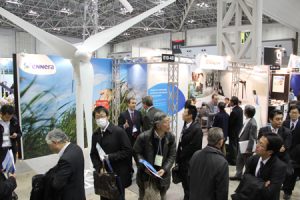 For the second year, wind industry professionals gathered to participate in WIND EXPO, a conference and exhibition focusing on the growing wind energy market in Japan.

The event, held February 26-28 at Toyko Big Sight, in Tokyo, Japan, was one of eight concurrently running exhibitions that were part of World Smart Energy Week.

ith major floating offshore projects currently taking place in the Japan, offshore related exhibits was one of the highlights of the show and actual project members took part in the show as exhibitors as well as conference speakers to share the latest information and to find business partners.

WIND EXPO saw modest growth in only its second year of inclusion as part of the larger event. Total exhibition floor space for WIND EXPO expanded by nearly 10 percent over 2013, showcasing both Japanese and international exhibitors and reflecting the increase in wind investment in the Japanese market.

The percentage of international exhibitors saw a significant jump of 70 percent, with some exhibitors participating as a pavilion.

Among the keynote presenters was Anne McEntee, GE’s Renewable Energy CEO, who, during her address, announced GE’s return to the Japanese market.

“The energy industry is going through major changes,” McEntee said. “Particularly, wind power generation is going to play an important role thanks to its ever improving high-efficiency and reliability, and GE is committed to continue to support its evolutions.

I also would like to express special thanks to the government and policy makers for its various supports such as FIT and government supported projects.

With those supports, I am confident Wind industry will continue to show significant growth in the future.”

WIND EXPO is expected to expand even further in its third year, with the new feed-In-tariff coming into effect soon. The majority of the exhibition space for WIND EXPO 2015 was reserved during this year’s event.

As a whole, more than 67,000 attendees attended the World Smart Energy Week 2014. Seminar session participation for the events jumped nearly 30 percent over 2013. More than 14,000 participated in seminar sessions.

World Smart Energy Week drew nearly 1,600 exhibitors across all of the events, 178 of which exhibited at the WIND EXPO event. That number was up slightly over the inaugural event in 2013 (167 exhibitors).