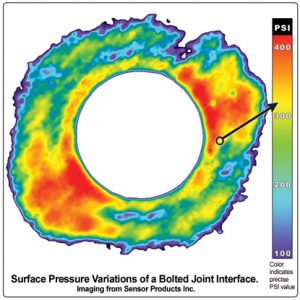 Sensor Products, Inc., a leader in the field of tactile pressure and force measurement, is pleased to announce it is offering Fuji Prescale pressure film. The film is a mylar tactile pressure indicating sensor film that instantly reveals surface pressure magnitude and distribution between contacting or impacting surfaces.

When placed between the surfaces it permanently turns different shades of red, with the color intensity being directly proportional to the amount of pressure applied. Prescale pressure indicating film shows precisely how bolted joints engage and deform under stress. Pressure variations are shown by the color changes left on the film. These colors can be compared to a color calibration chart to determine the exact pressure distribution.

While no instrumentation is required, the film impression can also be digitalized through imaging. Topaq, an imaging analysis program, assigns colors to pressure values. This graphic reveals pressure variations in a bolted joint interface. The non-uniform pressure distribution may be caused by a variety of factors including dimensional irregularities, surface roughness, and uneven bolt torque.

Since it is difficult to measure the force exerted by the bolts directly, torque values are often assigned for assembly based on trial and error. Prescale speeds assembly by quickly validating and confirming sufficient bolt torque to assure uniform interfacial pressure. To adjust torque values, the film is placed at the bolted joint interface and the bolts are tightened to apply pressure. The film is then removed and reviewed to see if the pressure is uniform. Common applications include measuring the interface pressure of bolted joints, gaskets, clamps, fasteners, connectors, flanges, valves, o-rings, and welding heads, among others. Wind applications include testing the bolted joints used in turbines.

Prescale is thin and flexible, allowing it to conform to both curved and straight surfaces. It may be hand or laser cut to fit unusual shapes and dimensions. It is ideal for invasive and intolerant environments not accessible to conventional transducers. The film confirms FEA predictions and has widespread applicability in research, design and test; assembly and production, quality control, and maintenance. Contact Sensor Products at (973) 884-1755, info@sensorprod.com, or www.sensorprod.com.