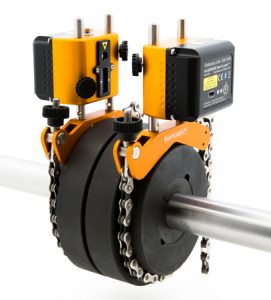 The ALiSENSOR SHAFTLASER features the most intuitive shaft alignment interface ever developed – in a 3D layout with live alignment diagrams and Graduated Tolerance Control to show both acceptable and excellent tolerances.  Vertical and Horizontal misalignment results are shown simultaneously in a 3D view, making it easier to understand and correct due to this unique, yet common-sense layout.  Like all ALiSENSOR products, all measurement program Apps, like Shaft Alignment and Soft Foot, are simply downloaded for free from the App Store.

The ALiSENSOR SHAFTLASER system consists of two wireless, Bluetooth laser measuring units, pre-assembled on Versatile Shaft Brackets (with adaptable components for mounting with chains or magnets), extension rods, and more – all in a rugged, compact case.  “Unlike shaft alignment systems where the computer display unit can cost thousands of dollars to replace, the ALiSENSOR SHAFTLASER can simply use an iOS device like an iPad, iPhone, or iPod Touch by downloading the free App measurement programs,” said Knitz.  The ALiSENSOR SHAFTLASER is part of the Industrial MFi (Made for iPad) program, a groundbreaking integration of the iPad and other iOS devices into industrial-grade tools and equipment which has revolutionized the world of precision measurement systems and equipment.

The ALiSENSOR platform is developed by GLOi AB, a pioneering company in the Industrial MFi sphere headquartered in Mölndal, Sweden.  GLOi AB was founded by Nils Andersson, a recognized luminary of the laser alignment industry, who originally founded both Fixturlaser AB and Damalini AB, two of the biggest laser alignment and measurement companies in the world.  Andersson, along with R&D / Embedded Systems Director Ali Chitsaz and a full team of Technical Design and Development veterans, have embraced the exceptional opportunities and possibilities of designing products directly for use with Apple’s iOS devices.  GLOi’s core development team also has an illustrious history of over 30 years of designing and developing some of the world’s best-selling laser shaft alignment systems.  GLOi has refined that expertise and modernized it by integrating the iPad – making shaft alignment easier, more reliable, and more affordable than ever.

The ALiSENSOR SHAFTLASER also incorporates several high-end features to its impressive slate of capabilities, including the ability to perform a standard 9-12-3 clock position measurement, or simply use a minimum of only two 20° rotations of the shafts.  Additionally, the system includes embedded help functions like video demonstrations and instructions.  The ALiSENSOR SHAFTLASER also features Graduated Tolerance Control, giving users the ability to use both “Acceptable” and “Excellent” tolerances during the alignment.  The ALiSENSOR SHAFTLASER creates fully-customizable PDF reports which can be preset with template information like Company Name, Operator, Company Logo, and more. The system also possesses the ability to include a photo of the machine (taken with the built-in camera of the iOS device) directly in the report.  The report file is automatically saved when the measurement is complete, and can be easily shared like other files on any iOS device – via email, mms, and even cloud services such as Dropbox.

“The ALiSENSOR SHAFTLASER is exactly the type of laser shaft alignment system that people have been waiting for – with high functionality, low cost, and breakthrough technological innovations that just make sense,” said Mr. Knitz.  “We anticipate that the arrival of the ALiSENSOR SHAFTLASER will revolutionize laser shaft alignment and create more incredible possibilities for Industrial MFi technology.”